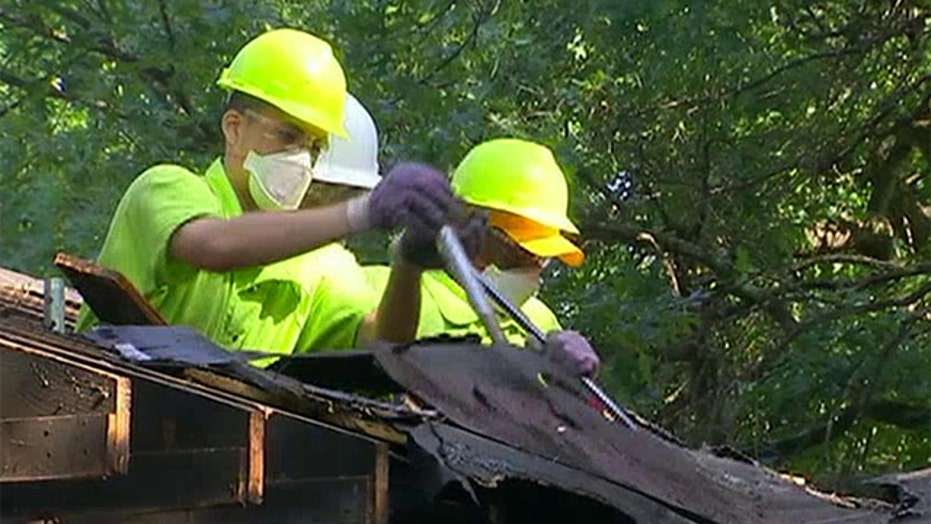 A Chicago sheriff has a new ally in the battle to rid the city of abandoned properties that attract squatters, drugs and crime: prison inmates.

Everyone wins, according to Cook County Sheriff Tom Dart, who says local communities get rid of eyesores, inmates learn legitimate demolition skills and taxpayers don't get stuck with the bill.

“They always have been magnets for crime,” Dart told Fox News as he oversaw one of his crews in action. “We’re going to another house a few blocks away where a young girl was raped just a short time ago."

“It's easy to get a job on a construction site. I was given a second chance.”

Unlike the chain gangs of old or the roadside cleanup crews, the inmates in Cook County come away with job skills that can help them earn an honest living on the outside. They are required to get safety training and get certified by the Occupational Health and Safety Administration, which is a benefit in getting hired after release. Whenever possible, jail administrators also try to connect participants with jobs.

“We look at these businessmen and say, ‘Listen, we're going to give you someone who has training, someone who has desire,'" Dart said. "We’ll vet them. We won't offer everybody, and say, ‘Please will you give them an opportunity?'"

Only non-violent offenders take part in the program, and the work comes toward the end of their prison terms, reducing the temptation to try to escape. Angelo Langston, 19, is one graduate of the program who will soon be leaving jail with an OSHA certification and skills that could change his life.

“It's easy to get a job on a construction site,” Langston said. “I was given a second chance.”

The biggest expense to taxpayers is in hauling away debris, but Dart said the county recoups some of that money by reclaiming some of the building supplies and re-selling them.

Riley Rogers, mayor of the Chicago suburb of Dolton, said he worried most about abandoned buildings near schools, but he didn’t have the money in the budget to do anything about it. Cook County inmates took care of the problem for him.

“It helps us in regards to bringing our community back,” said Rogers. “It helps us in terms of safety of the neighbors around these blighted homes. It helps us to make the school area safe. It’s just a win-win situation for us.”

While critics might argue prisoners are taking away jobs from those who haven’t broken the law, Dart said municipalities targeted have no money in the budget for demolition, so this is the only way it would happen.

Because the program is new, Dart said there are no figures available yet to show whether it helped keep newly skilled inmates from re-offending. But the results in communities are immediately apparent: Removal of abandoned and dilapidated properties is lessening crime and increasing property values, he said.