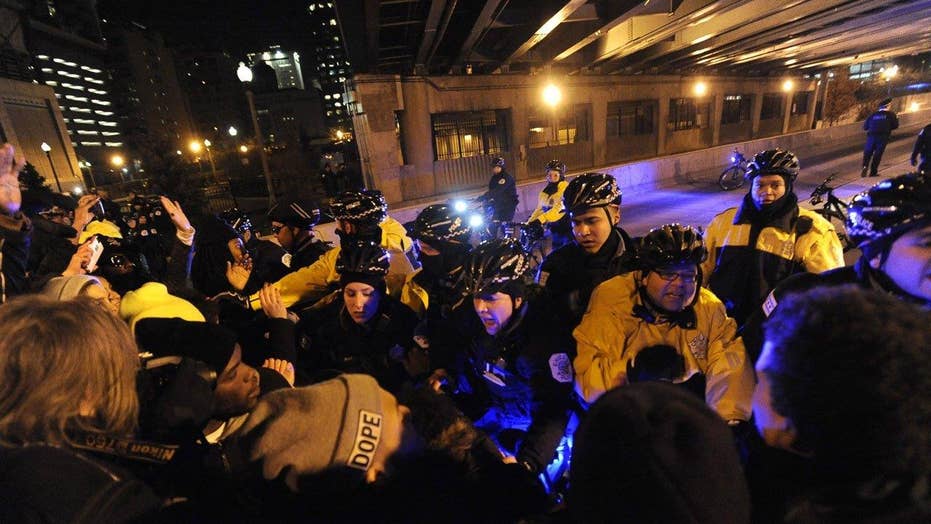 Police brace for another night of protests in Chicago

The white Chicago police officer charged with first-degree murder in the deadly shooting of a black teenager has amassed 18 civilian complaints against him over 14 years.

James Van Dyke has been accused of using racial slurs and excessive force, according to police and court documents. Complaints against police aren’t uncommon, but the number against Van Dyke was particularly high and at least one was linked to a civil trial where jurors awarded damages to someone he arrested.

Once instance includes a black woman accusing Van Dyke of repeatedly directing racial slurs at her as police searched her apartment on Dec. 1, 2013, the Associated Press reported, citing records from the Independent Police Review Board. The board eventually concluded the woman was “invasive, disruptive and provocative such that her arrest also would’ve been justified had it occurred.” The board concluded the officers’ actions were justified.

A 34-year-old black man who was stopped on suspicion of drunken driving on March 19, 2011, accused Van dyke of choking him when he refused to spit out a cough drop. Later, Van Dyke allegedly bent the man’s arm behind his back when he hesitated about taking a four breathalyzer test. The board concluded in that case there wasn’t enough evidence to prove or disapprove the allegations against the officer.

An investigation into whether Van Dyke used excessive force in an April 6, 2008 incident concluded he didn’t know how a 20-year-old black man sustained an injury to his eye. The man alleged that Van Dyke pointed a gun at him and a different officer kicked him in the eye as he lay on the ground. Van Dyke told investigators the man was stopped because he and other bystanders ran as police arrived.

A 41-year-old black man filed a federal lawsuit against officers following a 2007 incident where Van Dyke allegedly verbally abused him after a traffic stop. Van Dyke allegedly shoved the man into the squad car and injured both of his shoulders. The man won the lawsuit and was awarded $350,000 for his injuries.

He was charged Tuesday in the murder of 17-year-old Laquan McDonald in October 2014. Authorities released the graphic video purportedly showing Van Dyke firing on McDonald.

The relevant portion of the Chicago video runs for less than 40 seconds and has no sound.

Police have said the teen had a knife. Alvarez said Tuesday that a 3-inch knife with its blade folded into the handle was recovered from the scene.

The video sparked protests over the last two nights and some demonstrators have urged supports to join them to try and shut down Chicago’s famous Michigan Avenue shopping district during the Black Friday shopping boom.

The group held banners showing photos of other black people fatally shot by police in Chicago and elsewhere. Several protesters said they were parents of black men killed by Chicago officers.

"You cannot kill our children and expect us to be quiet any longer," protester Quovadis Green said. "It is unacceptable."

Obama said in a Facebook post that he is asking Americans to "keep those who've suffered tragic loss in our thoughts and prayers" this Thanksgiving "and to be thankful for the overwhelming majority of men and women in uniform who protect our communities with honor."

Obama said he is personally grateful to the people of his hometown — Chicago — for keeping protests peaceful.