There have been multiple white shark sightings off the coast of Cape Cod this summer.

On June 5 alone, there were four confirmed sightings, according to the Atlantic White Shark Conservancy's Sharktivity app.

There have been six during the past week – and not all the sightings are of live sharks. Two dead white sharks were also spotted on Cape Cod's beaches.

The app allows members of the public to report their sightings with photos, videos and text descriptions.

In this May 22, 2019 file photo, a couple stands next to a shark warning sign while looking at the ocean at Lecount Hollow Beach in Wellfleet, Mass. (AP Photo/Charles Krupa)

The season's first sighting was reported at the end of last month.

That incident was captured on video and shared on Twitter by the Nantucket Current.

A great white shark can be seen eating a seal off the beach from Nantucket's Great Point Lighthouse. 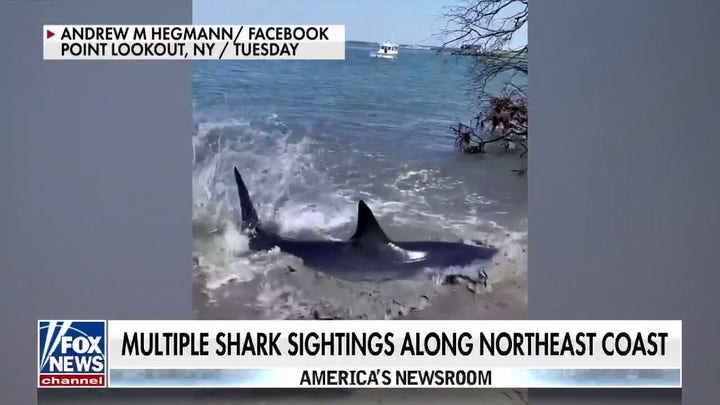 Onlookers to the attack can be heard screaming as the shark made its move close to shore.

"If you're heading to the beach, make sure to be Shark Smart and follow safety guidelines," the conservancy, a nonprofit located in Chatham, tweeted in response to the video.

However, peak shark months are later in the summer.