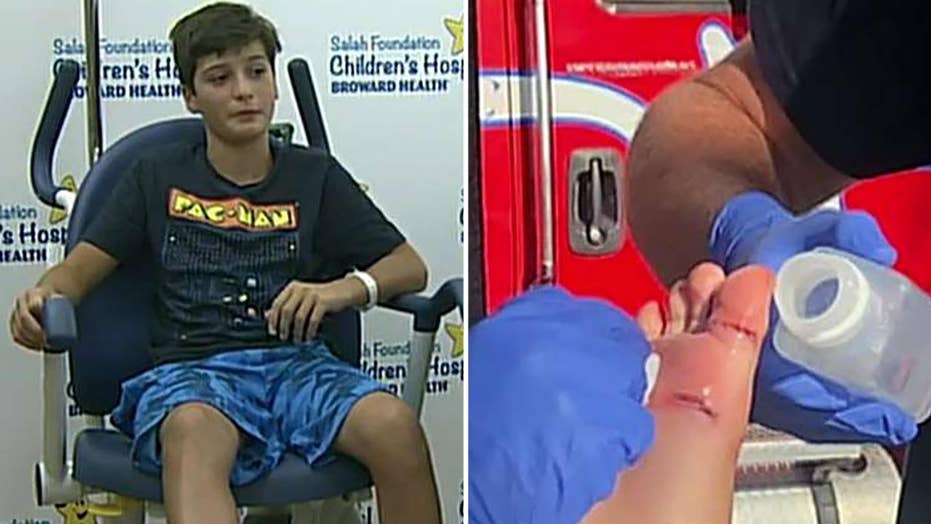 An 11-year-old boy gets 17 stitches after a shark bites his foot in Fort Lauderdale.

A Canadian boy had to get more than a dozen stitches on his foot after he was bitten by a shark on Wednesday while vacationing with his family at a Florida beach, officials said.

Fort Lauderdale Fire Rescue officials said the incident happened around 9 a.m. Wednesday, after lifeguards doing routine physical training heard a loud scream coming from the ocean across from The Ritz-Carlton in Fort Lauderdale. That's when they found 11-year-old Christian Mariani bleeding with puncture wounds on the beach.

“Just the fear of not knowing what bit you and what’s gonna happen to your foot after, that is the scariest feeling that I think I have ever experienced,” Christian told reporters at a news conference Wednesday afternoon.

Christian was transported to Broward Health Medical Center’s Salah Foundation Children’s Hospital, where he received 17 stitches for the bite on his foot and was released by the afternoon. The 11-year-old said he was in waist-deep water when he felt a biting, stinging sensation on his right foot.

“It was really scary because I knew something bit me,” he said.

The boy then got out of the water as quick as possible, noticing he had a lot of blood coming from his foot.

Dr. Francis Amador from BHMC told reporters he believed the boy was bitten by a shark.

“It was just a bite, and then it let go, so that was lucky for him,” he said.

New Smyrna Beach is known as the 'shark bite capital of the world.'

Shark bites are more common in the summer, when more people are in the water and ocean currents bring bait fish closer to shore.

“This time of year, we see a lot of bait fish that are coming down the coast. It’s the ocean. It’s very natural for these fish to be feeding,” FLFR Battalion Chief Stephen Gollan told WSVN.

Christian, who goes back to school soon to start seventh grade, told reporters the incident didn't scare him from returning to the water once he gets his stitches out.

“I feel more lucky than unlucky," he told reporters. "I know it’s a very low chance to get bit by a shark, but to be in the condition I am right now, that is also very lucky."