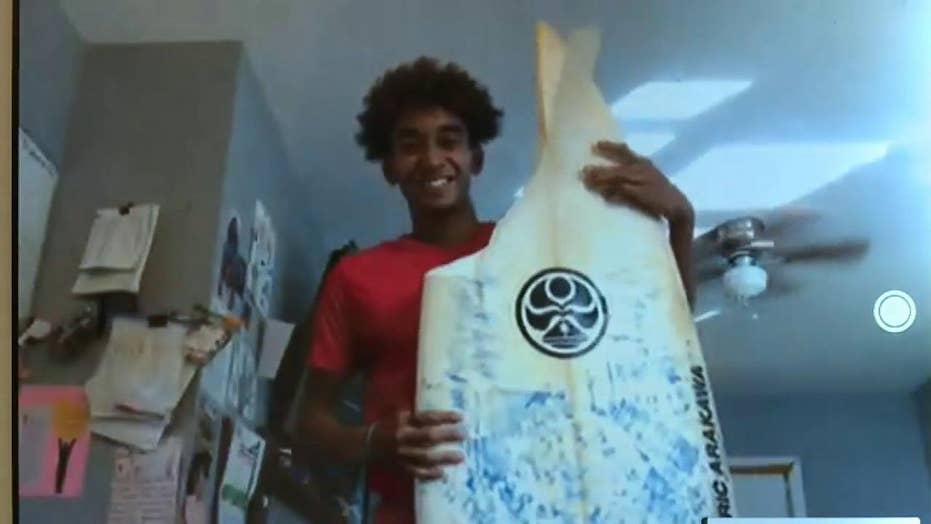 16-year-old Max Keliikipi was offshore when he spotted a shape in the water that turned out to be a shark, which then took a bite out of his board, narrowly missing his feet.

A 16-year-old surfer was inches away from becoming the latest victim of a shark attack over the weekend in Hawaii.

Max Keliikipi was surfing off Makaha Beach on the west side of the island of Oahu around 7:30 p.m. Sunday when he saw what he first thought was a turtle fin in the water. It wasn't until the creature was next to him that he realized it was a shark, KHON reported.

"It goes underneath the water, [and] I put my feet on top of my board. I’m just sitting there, looking around for it," Keliikipi told KHON. "And then, boom, it comes underneath me, bites my board."

Keliikipi said the shark was "[...] literally, and I’m not exaggerating this at all, literally an inch or two in front of my feet." The teen estimated the shark was between 10 and 12 feet long.

Keliikipi was thrown into the water when the shark took a bite out of the surfboard. Once in the water, instinct kicked in for the junior lifeguard.

"There is that fear factor. It was the fight or flight thing, and for me it was just flight. As soon as I hit the water, I just started swimming, and I didn’t think about where the shark was. I just had to get in [to shore]," Keliikipi said.

He made it to shore uninjured, but the incident left an impression on Keliikipi, who said he had seen sharks in the water near Makaha Beach before.

"Next time I’m just going to go in the daytime and with my friends, not surfing alone anymore," Keliikipi said.

Conditions at Makaha Beach were listed as "high hazard" for both offshore and nearshore on Wednesday, according to the Hawaii Beach Safety website. It was noted that people should stay out of the ocean.

A California man was killed in a shark attack off Maui in May, the first fatal incident in Hawaii since 2015.