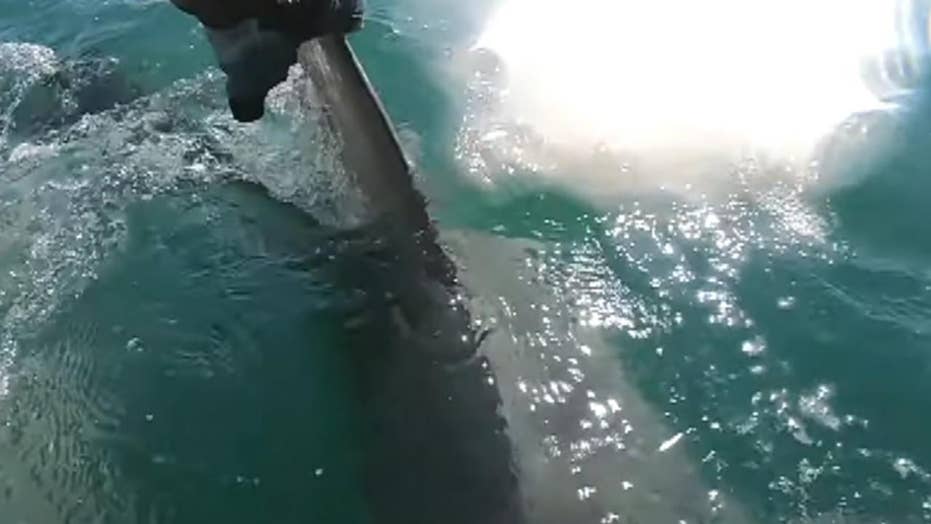 A Florida fisherman recorded video of his intense tug-of-war encounter with a huge hammerhead shark determined to steal his catch last week.

Rob Gorta, a fishing guide in the Tampa and St. Petersburg area for over 22 years, reeled in a tarpon that appeared to have bloody bite marks on its side.

With blood in the water, a hammerhead soon charged after the fish – and clearly didn’t plan on leaving emptyhanded.

“He just took it out of my hand!” Gorta could be heard yelling when the shark ripped the hooked fish from his grasp, in a video posted to his YouTube account.

Gorta and the shark battled in the waters off Anna Maria Island for the fish’s fate over the course of the 3-minute video. But, in the end, the hammerhead claimed its meal.

A hammerhead, like the one pictured above, ripped a tarpon out of the hands of a fisherman. (iStock, File)

The charter captain told WFTS-TV that he desperately tried to unhook the tarpon to give the fish a chance to escape the shark. He estimated the predator measured 14 feet long and weighed over 1,000 pounds, according to WFLA-TV.

“I really felt bad for the fish, you know. They are an amazing fish, and I make a good living off of them,” Gorta told WFTS. “They are a lot of fun, and I have the utmost respect for them. There’s nothing I could really do to save that fish.”

Gorta wrote he couldn’t take the fish aboard his boat because Florida laws prevented lifting tarpon out of the water. He added that it would have been dangerous to bring the 180-pound fish aboard a 22-foot bay boat.

It's illegal to lift tarpon over 40 inches in length out of the water, the Florida Fish and Wildlife Conservation Committee has said. In 2013, the committee made tarpon catch-and-release only.