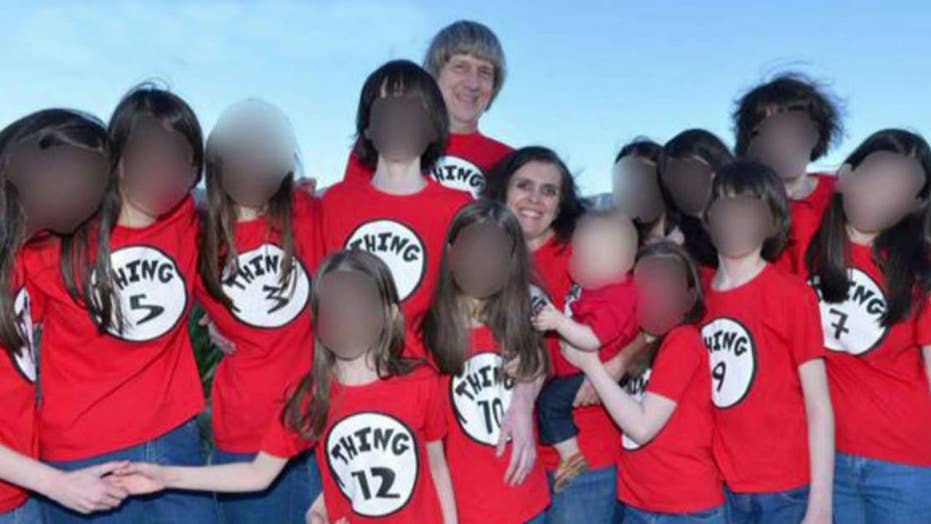 The footage, which shows the children being led one-by-one into a van in the driveway, appears to have been obtained and broadcast first by ABC News.

Similar footage in a CBS News report last week, captured from a neighbor’s camera, showed David and Louise Turpin being led out of the Perris home by authorities.

The children left the property – where they were shackled for up to several months at a time, according to prosecutors – 45 minutes later, the station added.

A Texas resident who lived near the family’s Rio Vista home in the early 2000s told the Los Angeles Times he walked through a trailer on the property after it foreclosed and found a “rancid” scene that was “waist-deep in filth.

“There were dead dogs and cats in there,” Ricky Vinyard said.

Vinyard added the family rarely left the four-bedroom, two-bath home, situated on 36 acres at the end of a dirt road, and David Turpin would sometimes stand in the driveway shooting cans with a pistol.

He also noticed one Christmas the couple bought eight new children’s bicycles, but they were left outside, weren't used and became discolored from the sun.

The Los Angeles Times reported police were called to the home in 2001 when a child was bitten by a dog and Vinyard’s uncle summoned authorities again a year later after three of the Turpin’s pigs got loose.

Louise and David Turpin appear in court for their arraignment in Riverside, Calif. They both entered not guilty pleas on all counts. (AP)

Vinyard said he and his wife considered reporting the couple to police, but decided against it because he “didn't want to have the repercussions with them” -- and Turpin was armed.

"I feel really guilty we didn't," he told the newspaper.

Billy Baldwin, who bought the Turpin’s Rio Vista home with his mother a year after it foreclosed, said the bathroom floor was rotted through and one Polaroid photo left inside showed a bed with a metal rail and a rope attached to it.

He added that inside the home, the living room – also littered with feces -- appeared to be set up like a classroom with small desks and a chalkboard, and everything inside “had locks on it.

"There wasn't a place in that house that wasn't filthy,” he said.

Louise Turpin, 49, and David Turpin, 57, entered not guilty pleas on all counts after appearing in court Thursday in Riverside, Calif. They were both ordered held on $12 million bail.

If convicted on all charges they face -- which include torture, child abuse, false imprisonment, dependent adult abuse and a lewd act on a child under age 14 -- they each face sentences of 94 years to life in prison, District Attorney Michael Hestrin said. The couple's next court date is Feb. 23.