One of a pair of suspects charged with allegedly kidnapping a 3-month-old baby from his grandmother's Northern California home had befriended the woman and became "obsessed" with the child, according to local Spanish-language reports.

The grandmother, Victoria Mejia, told Univision 14 San Francisco that she met Yesenia Guadalupe Ramirez, 43, at church. Ramirez befriended her and seemed to hover over her when her grandson, Brandon Cuellar, was near, Fox affiliate KTVU-TV reported.

Jose Roman Portillo , 28, and Yesenia Guadalupe, 43, are charged in the alleged abduction of a 3-month-old Brandon Cuellar from a San Jose apartment. (San Jose Police Department)

She constantly wanted to be around the child, Cuellar's mother Jessica Ayala said. She said she was at work cleaning houses when she got a call from her sister-in-law informing her of the abduction.

"I didn't know how to react," she told Univision. "I fell to the ground and it was a moment that I can't explain."

The boy was snatched on April 25 from Mejia's San Jose apartment as she was unloading groceries, police said. He was found Tuesday after an intense police search. Ramirez, 43, allegedly convinced Mejia to go with her to Walmart so they could buy baby supplies before the alleged abduction, the Univision report said. 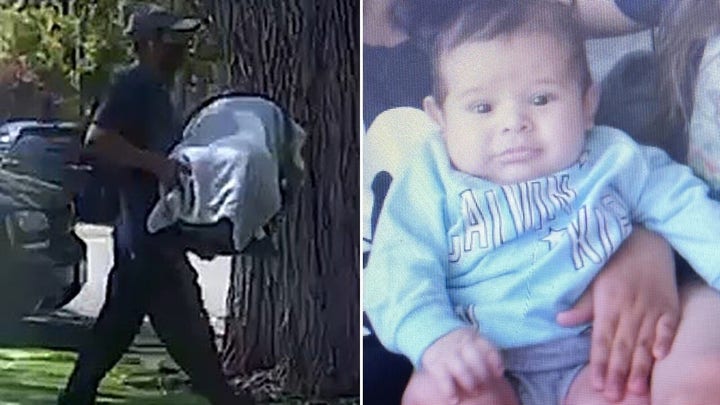 She was arrested after she kept changing her story during a police interview, authorities said.

A tipster spotted a van allegedly registered to Ramirez and Cuellar was found in the home of Jose Roman Portillo, who is also charged in the case. His connection to the case has not been disclosed.

He was allegedly seen on surveillance camera carrying a baby car seat and walking to a vehicle moments after the baby was taken. A third person who was arrested, Baldomeo Sandoval, 37, was released from police custody Thursday and will not face charges, the San Jose Police Department said.

Relatives told Univision that he is married to Ramirez.

Brandon Cuellar, a 3-month-old baby boy, was taken from his grandmother's San Jose apartment on Monday afternoon, police said. He was found the next day.  (San Jose Police Department)