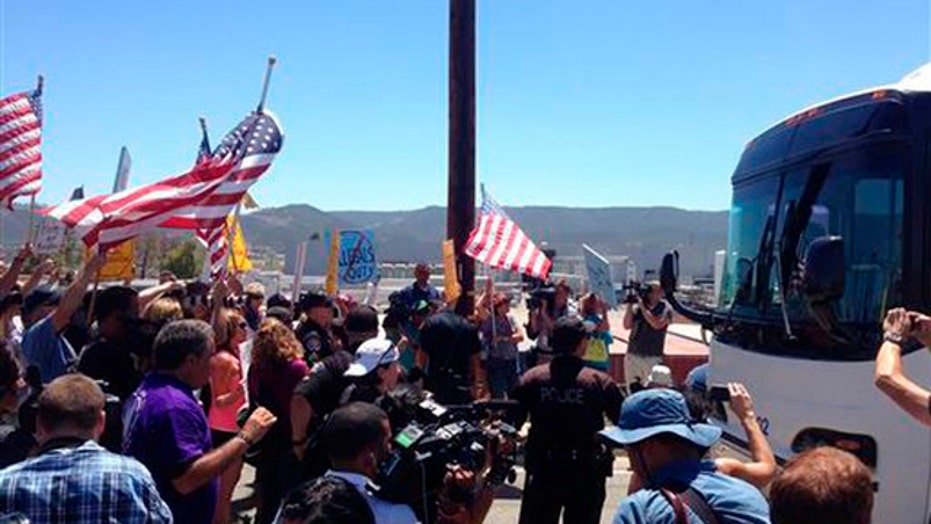 The Southern California town of Murrieta that gained national prominence when a crowd of protesters blocked buses carrying illegal immigrants being flown in from overwhelmed Texas facilities has become a flashpoint in what has become an intense national debate over immigration.

Earlier this week, approximately 200 protesters blocked buses carrying 140 illegal immigrants sent from a Texas to a US Border Patrol station, where they were to be processed before being moved to await deportation or asylum.

Days later, residents packed into a fiery town hall meeting, expressing their objections to the government sending any more illegal immigrants to Murrieta.

Rumors had swirled among anti-immigration activists near a U.S. Border Patrol station in Southern California that the agency would try again to bus in some of the immigrants who have flooded across the U.S.-Mexico border.

Instead, by late Friday afternoon, they got dueling anti- and pro-immigration rallies.

The crowd of 200 outside the station in Murrieta waved signs and sometimes shouted at each other. One banner read: "Proud LEGAL American. It doesn't work any other way." Another countered: "Against illegal immigration? Great! Go back to Europe!"

Law enforcement officers separated the two sides, leaving enough space for a bus to drive into the station.

Because of security concerns, federal authorities have said, they will not publicize immigrant transfers among border patrol facilities.

"This is a way of making our voices heard," said Steve Prime, a resident of nearby Lake Elsinore. "The government's main job is to secure our borders and protect us -- and they're doing neither."

Immigration supporters said the immigrants need to be treated as humans and that migrating to survive is not a crime.

"We're celebrating the 4th of July and what a melting pot America is," said Raquel Alvarado, a high school history teacher and Murrieta resident who chalked up the fear of migrants in the city of roughly 106,000 to discrimination.

"They don't want to have their kids share the same classroom," she said.

"What we're saying is right now [illegal] immigration needs to stop," Patrice Lynes, a retired nurse from neighboring Temecula who has organized the protests, told The Wall Street Journal.

"This is not just a Murrieta situation. This is a national situation," she said.

In recent months, thousands of children and families have fled violence, murders and extortion from criminal gangs in Guatemala, El Salvador and Honduras. Since October, more than 52,000 unaccompanied children have been detained.

Burke Hinman, who has lived in the city for over 22 years, told The Wall Street Journal he wants to protect his community from being a "dumping ground" for migrants. As vehicles drove past the station, and Mr. Hinman raised his fist or shouted "U.S.A."

Protester Melinda Ward says Murrieta's processing station isn't equipped to handle such a large group of people, and worries that costs of housing and medical care will eat away at tax revenue.

"It all comes down to the tax dollars. We're paying for it," she said. "The government has dropped it on us and now we have to pay for it."

The Border Patrol is coping with excess capacity across the Southwest, and cities' responses to the arriving immigrants have ranged from welcoming to indifferent.

In the border town of El Centro, California, a flight arrived Wednesday without protest.

In Nogales, Arizona, the mayor has said he welcomes the hundreds of children who are being dropped off daily at a large Border Patrol warehouse. Residents have donated clothing and other items for them.

In New Mexico, however, residents have been less enthusiastic.

At a town hall meeting this week, residents in Artesia spoke out against a detention center that recently started housing immigrants. They said they were afraid the immigrants would take jobs and resources from U.S. citizens.