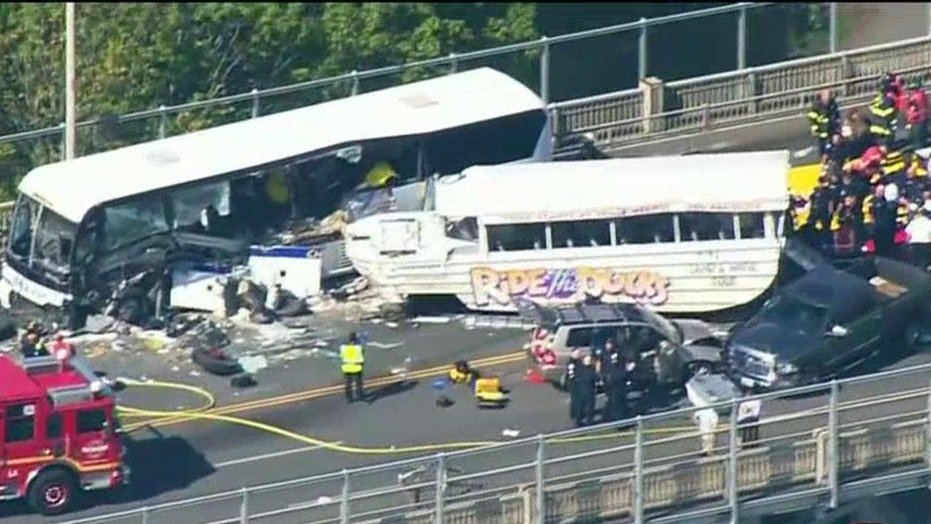 Four foreign college students were killed and 51 others were injured Thursday after a duck boat tour bus collided with a charter bus on a Seattle bridge Thursday morning.

The crash happened on the Aurora Bridge at around 11:13 a.m. local time when a Ride the Ducks tour vehicle reportedly rammed into the side of a bus owned by Bellair charters and airport shuttles. The charter bus was carrying about 45 foreign students and staff of North Seattle College to an orientation event at Safeco Field.

A statement from North Seattle College said the school was working to contact families of the victims and their national consulates. The two-year school has an enrollment of just under 7,000, 900 of whom are international students.

"No words are adequate to express the absolute pain and sorrow we all feel as a result of receiving this devastating news," a statement from the college read, in part.

"We didn't see anything. Just the sound. The smell of gas," Rujia Xie, a 16-year-old student from China, told the Associated Press. She said glass fell on their faces, and some people jumped from the bus.

Xie held a bag of ice against some bruises on her face as she left the North Seattle College campus, where the less seriously injured people on the bus were taken.

The National Transportation Safety Board announced Thursday afternoon that it will send a team to investigate the crash. The official cause of the accident has not been determined. Initial reports described the accident as a head-on collision.

A driver who was behind the duck boat said the tour bus and duck boat were headed in opposite directions on the bridge, which carries one of Seattle's main north-south highways over a lake. Brad Volm, of Philadelphia, said the amphibious vehicle swerved in front of him. The left front tire of the duck boat appeared to lock up, and the vehicle swerved into the oncoming charter bus, he said.

Witnesses described hearing a loud screech and then seeing injured people lying on the pavement or wandering around in a daze.

Nurse Jahna Dyer said she was walking across the bridge when she came upon the scene, a mess of jumbled metal and glass. Some victims were lying on the road. Others milled about, seemingly in shock and falling down.

Dyer jumped a railing separating the sidewalk from the roadway to help some of the victims.

John Mundell said he was at the south end of the bridge when the crash occurred.

"We could hear the screech and twisted metal. It was surreal," he said, adding he saw what appeared to be a few dozen people on the ground. "I wanted to try to help. I felt helpless."

When emergency crews arrived, "a lot of people were running at them," pleading for help, Seattle fire Lt. Sue Stangl said.

The Seattle Fire Department said on Twitter that 90 firefighters responded to the incident.

A tour bus crashed into a charter bus on a Seattle bridge Thursday. (Seattle Fire Dept.)

"Very early on in the incident [firefighters] were able to get the majority of people off the bus," Seattle Fire Department Lt. Sue Stengel said. "There's quite a few people that self-extricated from the accident."

The amphibious vehicle was operated by a tour company called Ride the Ducks, which offers tours that are known for exuberant drivers and guides who play loud music and quack through speakers as they lead tourists around the city.

Late Thursday, Ride the Ducks announced it would suspend operations until Monday morning, "with a heavy heart and out of respect to the people who have lost their lives and those who were injured."

Bill Tracey, the president of Ride the Ducks, told the Seattle Times earlier in the day that "all I care about is the safety of the passengers and the people who were injured on the duck." He added that the company continually trains and conducts ongoing education classes to ensure safety.

Ride the Ducks has been involved in two other collisions, in December 2010 and June 2011, according to the Seattle Times. Both of those accidents involved the bus rear-ending a passenger vehicle and didn’t result in injuries. However, both Ducks drivers told authorities they didn’t see the cars they hit due to the height of the vehicles they were operating, the Times reported, citing collision reports.

The tour company has been in operation since 1997. The bridge was reopened to traffic at approximately 11 p.m. local time.