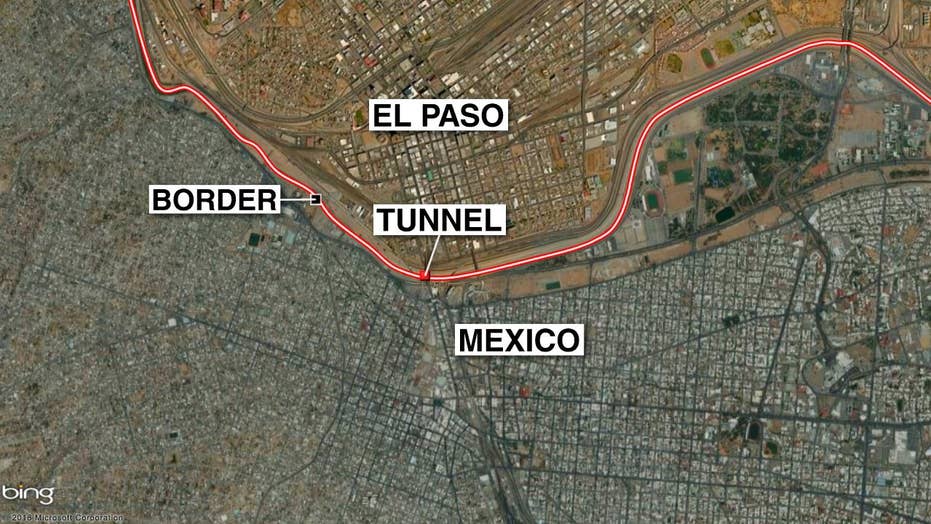 Border Patrol found a tunnel on the U.S. - Mexico border after a cave in at construction site

Border Patrol agents in El Paso, Texas found a 75-foot tunnel along the U.S. bank of the Rio Grande river – and one former Border Patrol chief believes its origins could go back 100 years.

The tunnel was found when Texas Department of Transportation employees were building near downtown and notified Border Patrol agents of a cave in. The Border Patrol’s Confined Space Entry Team went inside to take a look and found it goes further into the U.S. but not into Mexico.

“Remediation efforts are already under way, which include filling the tunnel with concrete. At this time we are working with federal, state and local partners in order to determine the purpose of this makeshift structure,” said Aaron Hull, chief patrol agent of the U.S. Border Patrol, El Paso Sector.

Law enforcement officials say the tunnel managed to escape notice for decades – even though it’s in a high-security area. The heavily patrolled location has a security camera about 200 yards south, and there’s a major highway construction project directly above. Yet it took a cave in for authorities to find it.

The inside of the tunnel found last week by Border Patrol Agents in El Paso, Texas. (Fox News)

The tunnel is covered by a wooden door in an area with thick bushes. It’s about 10 feet below a road with a concrete barrier, the type usually used for medians on highways.

The entrance to the tunnel, it was well hidden by bushes and a cover. (Fox News)

Journalists were not allowed inside for safety concerns, but a look in showed it’s about 2-feet high and 3-feet wide. It is supported by wooden beams going up the side and wooden planks across the ceiling.

El Paso has an extensive storm drain system with major spillways along the banks of the Rio Grande. That system is used by human smugglers to hide migrants and avoid climbing over the large 18-foot fences, so man-made tunnels of this type are less common.

But former El Paso Border Patrol Chief Victor Manjarrez believes this tunnel could have been used for opium smuggling between 1900 and 1920, when downtown El Paso was Chinatown.

Downtown El Paso, which once had a thriving Chinatown, has miles of underground tunnels that were used to smuggle drugs and Chinese immigrants from Mexico during the Chinese Exclusion Act. Some call it an underground railroad of sorts for the Chinese at the turn of the 20th century. Years later, the city still finds remnants of those tunnels.

“When I heard about, in essence, a cave in, which is what the Border Patrol found, right off the bat I thought it’s one of the dens. It’s one of the Chinatown opium dens,” said Manjarrez. He did research on the history of the dens for ICE in 2014.

Manjarrez said this isn’t the first find of its kind. Three years ago, workers constructing highway 375 near downtown found a very similar tunnel.

Perhaps most interesting is the tunnel may not have always been located along the river. The border between El Paso and Juarez used to be different and changed when the Rio Grande flooded. It wasn’t until the Chamizal convention in 1963 that the river was cemented to have a permanent track between the two cities.

“A tunnel on the banks there doesn’t surprise me. Because that was probably constructed back again at the turn of the century in the 1900s and the river would have been much, much different,” said Manjarrez.

But it is possible the tunnel has been used more recently for nefarious activity. A wheel barrel, plastic water bottle and ball of string were visible inside.

“I have no doubt that if there was current criminal activity, that’s what they were doing. They were trying to exploit something that already existed. And that makes sense,” said Manjarrez. “Why make something from new when you have a portion of it done?”