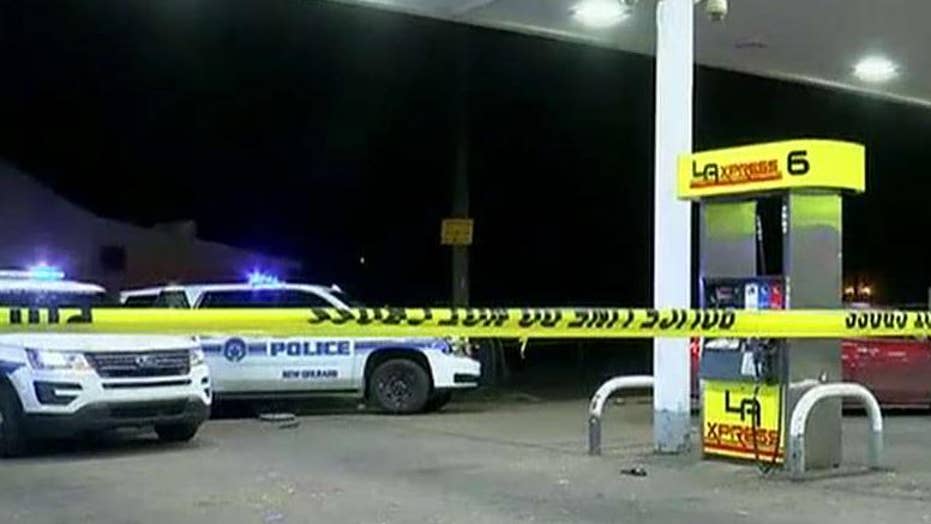 Police say three people were killed, three others were wounded when multiple suspects opened fire on a house party.

New Orleans police were hunting for suspects on Wednesday morning as Mardi Gras celebrations came to a violent end with a series of shootings across the city that left three dead and five wounded.

The first two shootings happened Tuesday afternoon, when a fight and a verbal altercation broke out near the traditional parade route.

The police said one man was shot in the head on Union Street during a brawl involving roughly 10 people, and was “reported to be coherent and talking prior to transport” to a local hospital. They also said a juvenile was in stable condition with a leg wound after he was shot in the same scuffle.

Authorities later released a surveillance image of a man believed to be the gunman in that attack, and said they were seeking public help making an ID.

New Orleans police are looking for this man, believed to be a gunman in one of the shootings that happened in the city on Tuesday. (New Orleans Police Department)

Another man was shot during a separate fight, and died from what appeared to be a pair of bullet wounds after being rushed to the hospital, Police Chief Michael Harrison told The Associated Press.

Police said Tuesday that they were interviewing a person of interest – who is believed to have knowledge of the attack -- that was taken into custody. On Wednesday, they also put out an arrest warrant for 18-year-old Eddie Dingle, who is wanted in connection with the attack.

Eddie Dingle, 18, is wanted in connection with one of the shootings. (New Orleans Police Department)

A third shooting unfolded on Tuesday as people celebrated late into the evening at a house party in the Lower 9th Ward, about two miles from the parade route. Witnesses described a fusillade of bullets.

Police spokeswoman Ambria Washington said multiple suspects opened fire on a car with five people inside. The gunfire shattered the windows, flattened the front tires and left more than a dozen bullet holes in the driver's door.

The driver managed to roll to a nearby gas station before two people in the car died from their wounds. It was not immediately clear if the driver was one of the fatalities. Arriving officers strung up police tape to keep crowds away.

Police move a body into a coroner van at the scene of a Mardi Gras Day shooting that left at least one dead and others injured in the Lower 9th. (AP)

"It's been rough. Situations like this are really frightening, and everyone is scared,” the gas station’s manager, who declined to give his name, told The New Orleans Advocate.

He added that someone burst into the store when the shooting happened and yelled: "Call 911! Somebody got killed!"

At that scene and outside the family home of some of the victims a few blocks away, mourners were still wearing festive Mardi Gras shirts and hats.