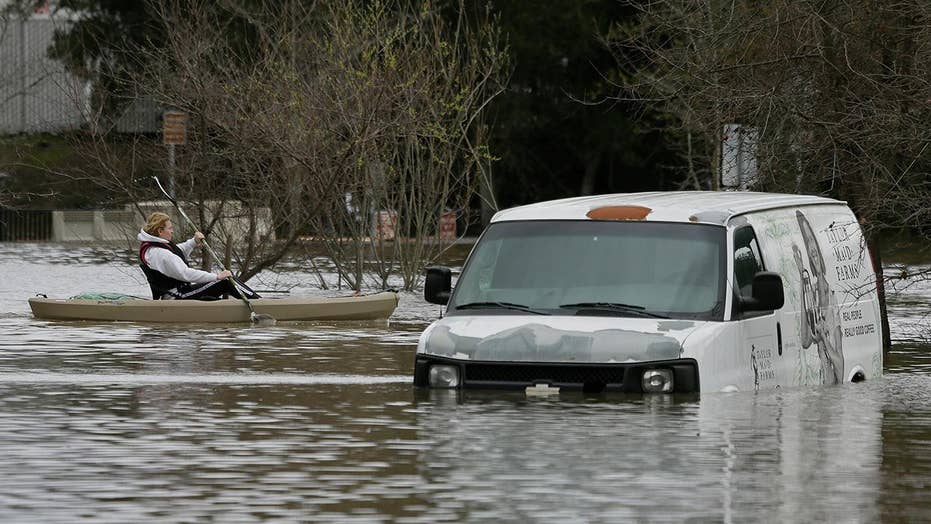 Throughout the year, a weather system known as an "atmospheric river" can impact the West Coast of the U.S., causing flooding, heavy snow and possible mudslides.

The National Oceanic and Atmospheric Administration defines an atmospheric river as a huge plume of subtropical moisture that moves with the weather, carrying water roughly equivalent to the average flow at the mouth of the Mississippi River.

The name "atmospheric river" came from research published in the 1990s by scientists Yong Zhu and Reginald E. Newell of the Massachusetts Institute of Technology.

Atmospheric rivers are typically 250 to 375 miles in width but can come in "many shapes and sizes," according to the NOAA, which adds that those with the largest amounts of water vapor and strongest winds may create extreme rainfall and floods.

Atmospheric river with the largest amounts of water vapor and strongest winds can create extreme rainfall and floods. (NOAA)

"These events can disrupt travel, induce mudslides and cause catastrophic damage to life and property," NOAA states.

Although they occur globally, atmospheric rivers are especially significant on the West Coast of the U.S., where they create 30 percent to 50 percent of annual precipitation and are linked to water supply, according to NOAA.

In 2019 an atmospheric river weather event pounded Northern California, inundating towns north of San Francisco with flooding and bringing the threat of mudslides to the region.

A well-known example of a strong atmospheric river is called the "Pineapple Express," which is capable of bringing moisture from the tropics near Hawaii over to the West Coast of the U.S.

While the weather systems are most well-known for causing damage, there are benefits to atmospheric rivers that are mostly weak and provide "beneficial rain or snow" crucial to the water supply.

"A series of atmospheric rivers fueled the strong winter storms that battered the U.S. West Coast from western Washington to southern California from Dec. 10–22, 2010, producing 11 to 25 inches of rain in certain areas," according to NOAA. "These rivers also contributed to the snowpack in the Sierras, which received 75 percent of its annual snow by Dec. 22, the first full day of winter."