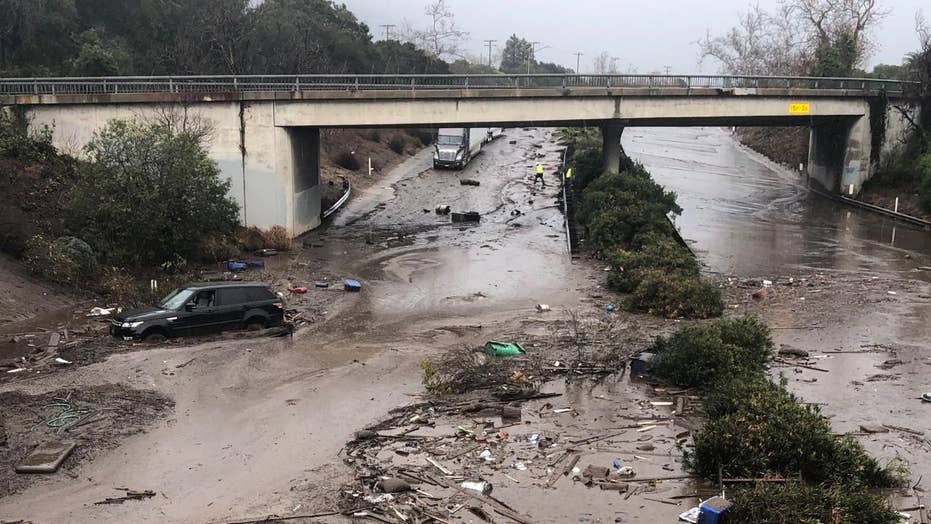 California Mudslides: What makes them so destructive?

This animated video explains how the Southern California mudslides were so destructive after the recent spate of deadly wildfires.

From time to time, parts of California are at risk of powerful mudslides as flooding causes mud and debris to slide down hillsides into communities.

A weather system known as an "atmospheric river" can help trigger mudslides in California. An atmospheric river, or a huge plume of subtropical moisture, can bring inches of rain in foothills and mountains. The flooding caused by such weather events can send mud and debris sliding down from wildfire-charred hillsides that are stripped of vegetation, eventually reaching the communities below.

In 2018, some 21 people died from the mudslides that swept over parts of the state’s southern region, mainly in Montecito, Santa Barbara County — an area northwest of Los Angeles that’s home to celebrities such as Ellen DeGeneres, Rob Lowe and Oprah Winfrey, among others. Several homes were destroyed because of the mudslides, which were sparked after torrential rains caused flash flooding in the Santa Ynez Mountains.

Here’s what you need to know about mudslides.

Why do mudslides occur?

A firefighter stands on the roof of a house submerged in mud and rocks Wednesday, Jan. 10, 2018, in Montecito, Calif. (The Associated Press)

Mudslides, also known as debris flows, are a type of landslide that can occur after a natural disaster, such as a wildfire. Debris flows often contain mud, rock and other materials.

“Human modification” of land can make certain slopes and steep areas “vulnerable to landslides during and after heavy rains,” according to the Centers for Disease Control and Prevention, which estimates that roughly 25 to 50 people die each year in the United States because of land and mudslides.

But mudslides can also occur without a wildfire preceding it, according to Francis Rengers, a research geologist at the United States Geological Survey (USGS), the science agency for the Department of Interior.

In January 2018, “you had a large amount of rain and a burn area that didn’t need much to get going in the first place,” Rengers said.

A few different factors contribute to debris flows in Southern California, David Peterson, a professor of forest ecology at the University of Washington, told Fox News.

Winter rainstorms in Southern California cause deadly mudslides. Take a look at some of the latest images of the devastation.

The Thomas Fire, which burned more than 280,000 acres and primarily affected Ventura, Montecito, Carpinteria and Santa Barbara Counties, removed “all of the living and dead vegetation that protected the soil beneath,” Peterson said. The land quickly eroded when there was no vegetation to hold it in place.

The fire was also hot enough to “cook out” the organic matter in the soil, which helps the earth to absorb water when it rains.

“When you have five or more inches of water in a day or two, it doesn’t buffer the impact of the rain on the soil,” he said, adding that the soil also became very hot from the wildfires. This results in the so-called “hydrophobic effect,” which causes the soil to repel water.

Different soil texture can also affect the severity of mudslides, Peterson said. As for the January 2018 incident, however, Peterson added that “the upper layer of soil got so saturated [by the rain] that it became like Jell-O and just flowed downhill.”

Where do they occur?

Mudslides typically occur in areas with steep hillsides, gullies and other narrow channels that make it easy for rain, mud and debris to flow through -- much like the terrain in Southern California, Peterson said. These gullies and other passageways form over millions of years.

In the West, “the rains always come in the winter, flow downhill and create these big drainages,” he said.

While Peterson acknowledged the devastation that mudslides have caused, he said that the occurrence is a “natural phenomena."

"Big mudslides are normal. This has happened for millions of years,” he said.

Is there anything that can be done to prevent or stop mudslides?

The short answer: no.

“There’s nothing to prevent the magnitude of these events,” Peterson said. While dams might catch some of the sediment, he said, the structures wouldn’t be of much use for a large mudslide.

It’s unclear if the Thomas Fire made the mudslides worse. Peterson suspects not. But Rengers said the USGS is continuing to research the phenomena.

“Basically, the really high rainfall rates are what controlled the really large response that we saw. And the damage inflicted by the debris flows is proportional to the rainfall,” Rengers said in January.

What can people do to protect themselves?

Peterson cautioned those who choose to live beneath steep hillsides in Southern California.

“There are many homes at the bottom of these steep drainages. But at some point mudslides will happen,” he said.

He explained that when people choose to build their homes at the bottom of these steep drainages, they “decide to take on the risk because they think it’s a low probability it [mudslides] will happen to them.”

Most of the stucco-style homes that are popular in California don’t have basements or subfloors, meaning they have relatively little defense against the powerful mudslides.

Since many of the stucco homes are placed on top of a cement slab, the soil from the mudslide weighs more than the house. The result? The homes become like “a little boat in the bathtub,” he said. “These are natural risks that people need to think about.”

Peterson said most people would have better luck defending their home from fire than a mudslide. In 2014, debris and mud from a mudslide in Oso, Wash., covered a square mile in roughly 20 seconds, Peterson said.

Rengers cautioned people who do have homes in these areas to “heed all evacuation warnings.”

“If they don’t evacuate and are stuck, they should try contacting local authorities,” he said.