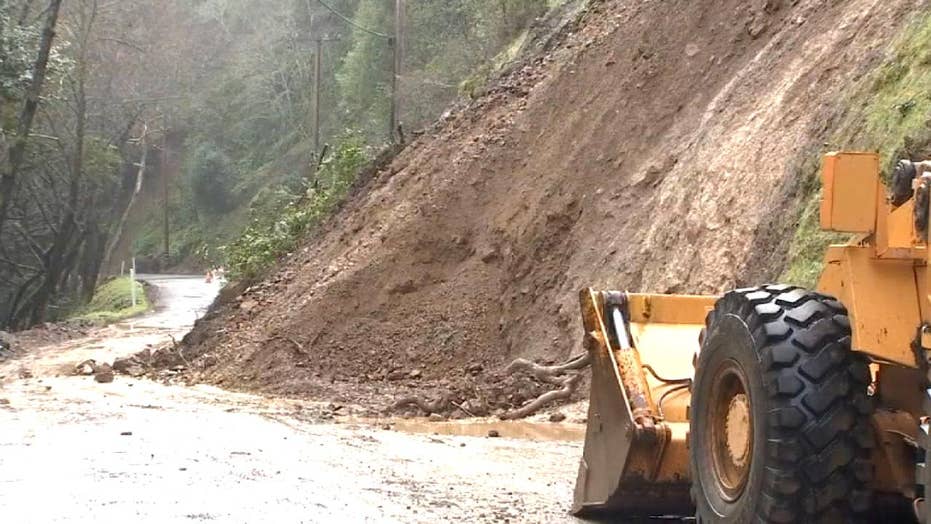 A weather system known as an "atmospheric river" is unleashing heavy rain across California, bringing the threat of mudslides and flooding Thursday to a region that's already been slammed by days of rain and heavy snow.

"Several inches of rainfall is expected across much of southern California, with the highest totals for the coastal mountain ranges," the NWS said. "There is a high risk of excessive rainfall on Thursday for the southern California mountains, capable of causing flash flooding and mudslides."

WHAT IS AN ATMOSPHERIC RIVER?

The storm system is part of what's known as an atmospheric river, which the National Oceanic and Atmospheric Administration says is a huge plume of subtropical moisture.

"Atmospheric rivers are relatively long, narrow regions in the atmosphere – like rivers in the sky – that transport most of the water vapor outside of the tropics," the NOAA states. "These columns of vapor move with the weather, carrying an amount of water vapor roughly equivalent to the average flow of water at the mouth of the Mississippi River."

The storm on Thursday spawned flash flood warnings across the state, with forecasters urging residents to move away from areas that recently burned in wildfires over fears heavy rains will likely trigger rockslides, mudslides and debris flows.

An unstable hillside, soaked with rain, caused a home in Sausalito, Calif. to slide about 75 yards into another home across the street. (KTVU)

In Northern California, an unstable hillside, soaked with rain, caused a home in Sausalito to slide about 75 yards into another home across the street.

The threat of mudslides lingers in California due to days of heavy rain. (KTVU)

Fire officials told KTVU a woman was inside the home but able to be rescued.

Heavy rain caused accidents and highway closures across the region due to flooding.

In Castro Valley, Alameda County Fire said on Twitter a broken water main caused a major sinkhole that led to an SUV getting stuck in floodwaters.

The NWS said that the powerful winds from the jet scream led to wind gusts of 164 mph at Mammoth Mountain Summit early Thursday.

Winter storm warnings were posted in the snow-laden Sierra Nevada, where the forecast says up to 7 feet of new snow could be dumped at elevations above 9,000 feet. A backcountry avalanche warning was issued throughout the Sierra.

The West's winter storms have greatly aided California's water supply. The most recent Sierra snowpack survey taken on Jan. 31 was 100 percent of normal to date and more snow has fallen since.

In the Eastern Sierra, the Mammoth Mountain resort reported the latest storm had already added another 8 inches to its summit season total, which is nearing 38 feet. Mammoth said it planned to keep its slopes open to skiing and boarding through the Fourth of July, at least.