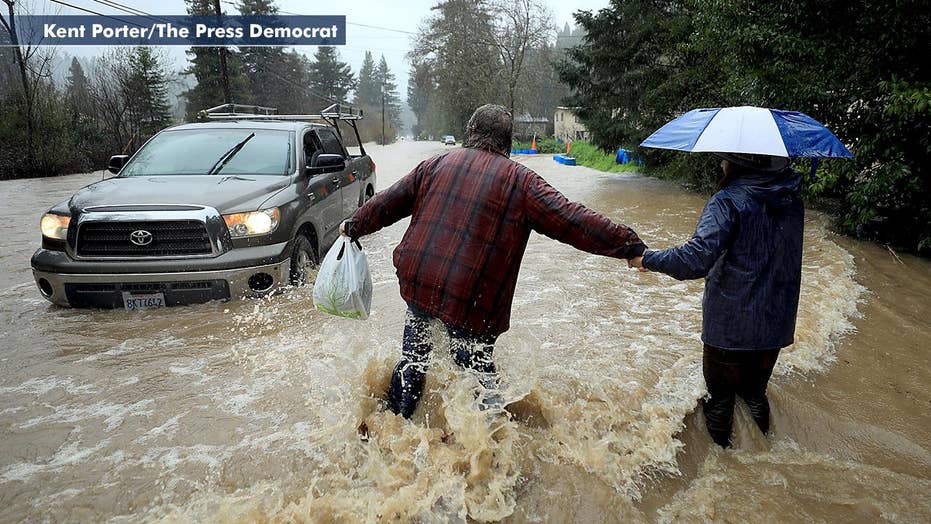 Days of heavy rain from a weather system known as an "atmospheric river" pounding Northern California has spawned floodwaters that have inundated a town north of San Francisco, cutting off all road access Wednesday as authorities warned thousands to flee.

The Sonoma County Sheriff's Office said the town of Guerneville is "officially an island" because all roads leading to it are covered by water from the Russian River.

"Guerneville is land locked," the agency said on Twitter. "You cannot get into or out of town. All roads leading to the community are flooded."

WHAT IS AN ATMOSPHERIC RIVER?

Barry Dugin, a spokesperson for the Sonoma County Office of Emergency Operation Services, told Fox News that evacuation alerts have been sent out to over 3,600 people in and around Guerneville, located about an hour's drive north of San Francisco.

Two shelters have been set up that have about 75 people in them so far, according to Dugin. No injuries have yet been reported, but a mudslide on Highway 116 has closed the roadway.

Fire agencies told KTVU on Tuesday they're expecting things to get worse before they get better. Monte Rio Fire Chief Steve Baxman was out in a 5-ton Army truck riding above floodwaters trying to rescue residents who had stayed behind.

"They always wait until the water gets around their house and then they call and say they can't get out," he told KTVU. "They're not hurt. they just waited too long to get out."

On Tuesday, a mudslide near Monte Rio near Guerneville in areas scarred by 2017 wildfires trapped a man and a woman before they were rescued, messy but unharmed.

"Well, I fell into the mud when the tree fell over the top of me. It happened so fast you don't even know, you know?" Kear Koch told KGO-TV.

Dugin told Fox News the Russian River is expected to crest by Wednesday night at 46 feet, which would be the highest level in about a quarter-century. While Dugin said the "worst of the rain" has tapered off, the river is expected to remain at flood stage until late Thursday night.

Residents along Armstrong Woods Road head back to their home after the road became impassable to most vehicles, Tuesday, Feb. 26, 2019 in Guerneville, Calif. (Kent Porter/The Press Democrat via AP)

The storm system generating the flooding is what's known as an atmospheric river, which the National Oceanic and Atmospheric Administration says is a huge plume of subtropical moisture.

"Atmospheric rivers are relatively long, narrow regions in the atmosphere – like rivers in the sky – that transport most of the water vapor outside of the tropics," NOAA states. "These columns of vapor move with the weather, carrying an amount of water vapor roughly equivalent to the average flow of water at the mouth of the Mississippi River."

The National Weather Service issued flood warnings and flash flood watches for the San Francisco Bay Area and many parts of the Sacramento area, lasting into Thursday morning. The NWS's Bay Area office said that Venado, California in Sonoma County received an "incredible" 20.48 inches of rain in 48 hours.

The town of Guerneville and some two dozen other communities are at risk of flooding from the Russian River north of San Francisco, which hit flood stage Tuesday evening and was expected to peak Wednesday morning at more than 46 feet - the highest point in nearly a quarter-century. (Kent Porter/The Press Democrat via AP)

Relentless rain forced the cancellation or delay of hundreds of flights in San Francisco, and the city of Santa Rosa received a record 5.66 inches of rain, making it the wettest day on that date since at least 1902.

Several communities also were under evacuation orders in Butte County because of flooded creeks. Other waterways, including the Napa River, also were expected to overflow their banks as an ocean-spanning plume of moisture continued tracking through the West.

Guerneville often floods during heavy rain, but some residents said Tuesday they were not that concerned about the threat, according to the Associated Press.

"A couple of weeks ago people were using kayaks to get to their mailbox," said Joseph Chung, whose parents own the Koala's Fine Food restaurant. "If it gets really bad, we'll get out."