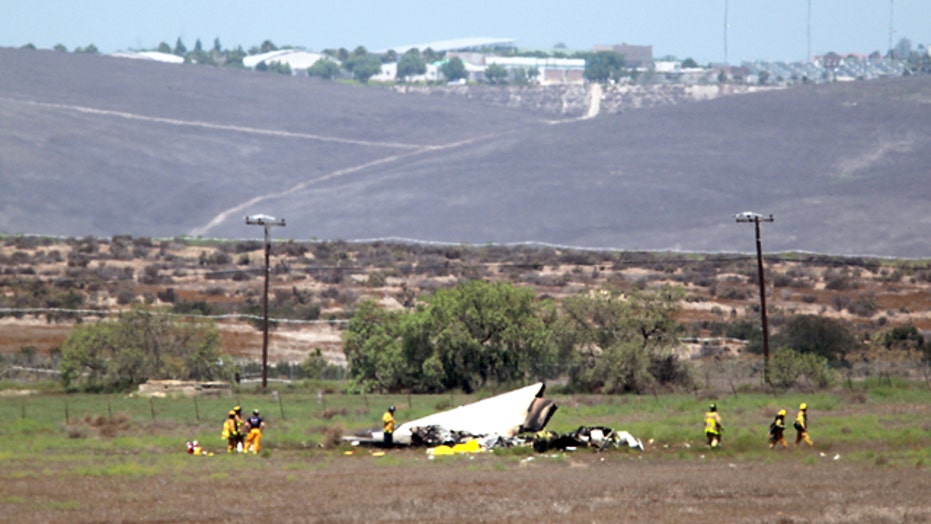 National Transportation Safety Board (NTSB) investigator Andrew Swick told NBC San Diego that four people were on board a twin-engine Sabreliner jet that collided with a single-engine Cessna 172.

The Sabreliner had been leased by military contractor BAE Systems, which issued a statement confirming its employees were on board the aircraft. The pilot of the Cessna was also killed. Swick said the Cessna pilot had been taking a cross-country trip.

The aircraft caught fire when they hit the ground and broke apart, said Nick Schuler, a division chief with the California Department of Forestry and Fire Protection. San Diego Fire-Rescue spokesman Lee Swanson told the San Diego Union-Tribune that two small grass fires were ignited by the crash debris, but were extinguished within the hour. No homes were damaged, but fire officials told the Union-Tribune that about two acres burned near where the Cessna crashed.

"It appears it was a very violent crash, as you can tell by both aircraft being in multiple pieces," Schuler said. "Witnesses reported hearing the midair collision. They reported hearing the aircraft hit the ground. And we had numerous reports that  there was fire in the area," said Cal Fire Division Chief Nick Schuler.

The Sabreliner crashed on a grassy slope and the Cessna fell within the bounds of the San Diego National Wildlife Refuge.

One firefighter was taken to the hospital after he suffered a heat-related injury, Schuler said. Temperatures in the area approached 100 degrees at the time of the fires.