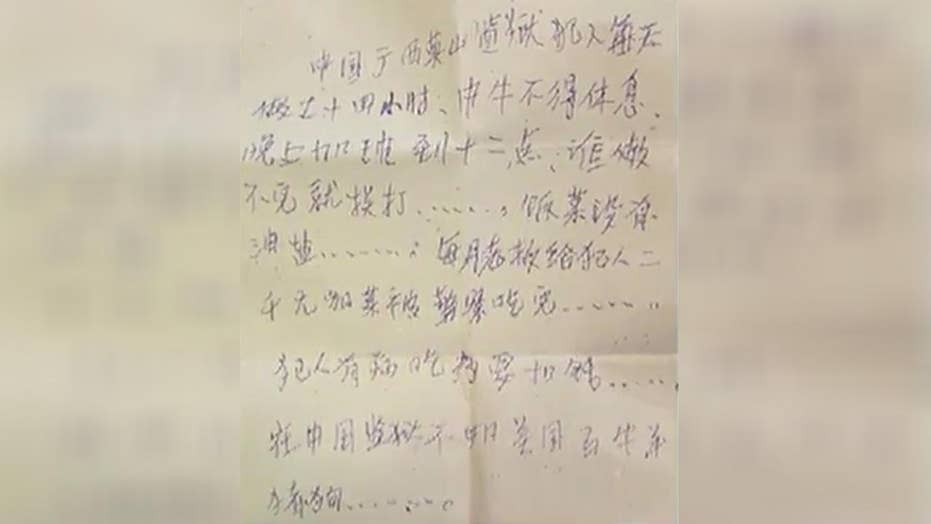 A woman in Arizona said she made a stunning discovery inside a new purse she bought at a Walmart: A note apparently written by a desperate prisoner in China.

Laura Wallace found the message, written in Chinese, tucked inside the zipper compartment of the purse she purchased at a Sierra Vista Walmart, KVOA reported.

Wallace had a Chinese-speaking person translate the note to English. The letter read:

"Inmates in the Yingshan Prison in Guangxi, China are working 14 hours daily with no break/rest at noon, continue working overtime until 12 midnight, and whoever doesn't finish his work will be beaten. Their meals are without oil and salt. Every month, the boss pays the inmate 2000 yuan, any additional dishes will be finished by the police. If the inmates are sick and need medicine, the cost will be deducted from the salary. Prison in China is unlike prison in America, horse cow goat pig dog (literally, means inhumane treatment)."

Two other people translated the note to make sure the message was accurate, Wallace added.

“I'm very sure that that's exactly what the note says,” she told KVOA.

Wallace said she wanted to share the note to bring awareness to the situation.

"I don’t want this to be an attack on any store," Wallace said. "That's not the answer. This is happening at all kinds of places and people just probably don't know."

Walmart issued a statement to KVOA on the incident. "We can’t comment specifically on this note, because we have no way to verify the origin of the letter, but one of our requirements for the suppliers who supply products for sale at Walmart is all work should be voluntary as indicated in our Standards for Suppliers."

Similar notes reportedly have turned up in items sold at stores such as Saks Fifth Avenue and K-Mart in the past.