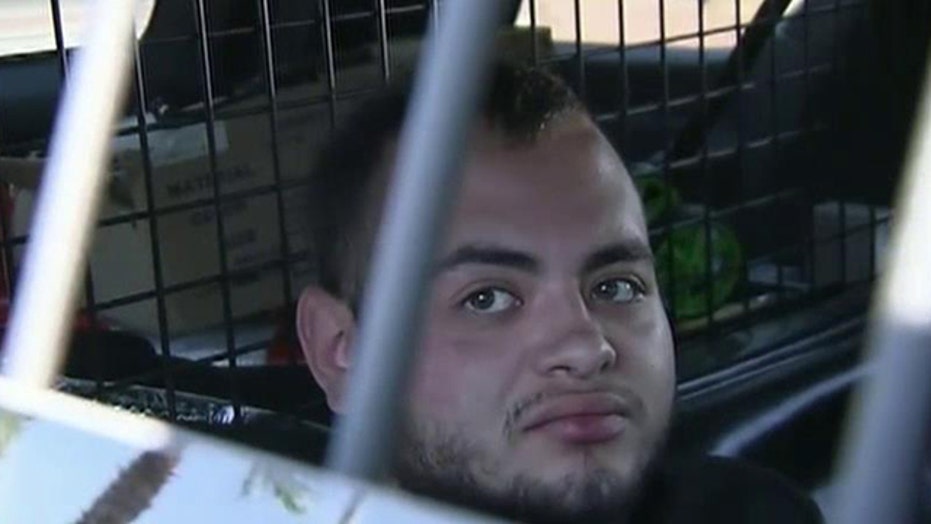 Person of interest in Phoenix highway shootings speaks out

Arizona state police were questioning a man in connection with a string of 11 confirmed freeway shooting incidents that have put Phoenix area motorists on edge, it was reported Friday.

Arizona Department of Public Safety spokesman Bart Graves told Fox News the two people were taking into custody as "people of interest" but could not provide information on what led investigators to pick them up.

Fox 10 Phoenix showed video of a man and woman being taken into custody late Friday morning at a Chevron gas station near Interstate 10 in Phoenix. Later, the station cited a police spokesman as saying only the man was being questioned about the shootings.

Police converged on the gas mart, focusing on a white SUV, the Associated Press reported.

The incidents, which took place within the last two weeks along the I-10, include a confirmed gunshot early Thursday that left a hole in the side of a commercial tractor-truck.

Police quickly discounted reports of a possible 12th shooting early Friday. The state police said they investigated a report of another freeway shooting that took place around 5:15 a.m. on I-17. Hours later a police spokesman said there was no physical evidence corroborating a motorist's report of hearing at least one gunshot.

The shootings have rattled nerves and heightened fears of a possible serial shooter, and some motorists have started avoiding using the freeways, instead taking city streets. No one has been seriously hurt in the shootings, although one bullet shattered a windshield and the broken glass cut a 13-year-old girl.

Authorities say that eight of the damaged vehicles were hit by bullets and three by projectiles such as BBs and pellets.

"Anytime that you have multiple shootings against American citizens on a highway, that's terrorism," Milstead said. "They're trying to frighten or kill somebody." He did not elaborate.

The latest incident happened just before 6 a.m. local time Thursday, when a commercial truck driver found a bullet hole in his cargo area after making hours of deliveries, so it was impossible to know where or exactly when it happened.

Milstead's agency brought in the FBI, the Bureau of Alcohol, Tobacco and Firearms and local police to assist in the investigation. Authorities have been conducting surveillance and deploying undercover detectives and members of the SWAT team and a gang task force.

"Anytime that you have multiple shootings against American citizens on a highway, that's terrorism"

Investigators are also appealing for help via social media, news conferences, TV interviews and freeway billboards. The messages have morphed from "report suspicious activity" to "shooting tips" to the more ominous "I-10 shooter tip line" on Thursday. Earlier this week, police quadrupled the reward for information leading to an arrest and conviction to $20,000.

Thousands of tips have come in, many proving to be false leads based on road hazards routine in Arizona, like windshields cracked by loose rocks sent airborne by the tires of other vehicles. On Thursday alone, drivers reported possible shootings of an armored truck, two cars and two tractor-trailers. Authorities and TV crews scrambled to these scenes, only to discover minor damage.

Juan Campana works at an appliance business near where many of the shootings occurred. He was surprised to look up and see helicopters on Wednesday after the 10th reported shooting.

"I go through the streets when I go home," he said.

Raul Garcia, a state trooper public information officer, told FoxNews.com that anyone who witnesses a shooting should call 911. He did not describe the firearm used and would not confirm media reports that there may be copycats.

"What we have is a very dangerous situation and somebody knows something," he said. "You need to let law enforcement know."

Milstead said drivers are fortunate that no one has been killed or seriously hurt, but if the incidents continue,"it's just a matter of time before there is a tragedy."

The shootings haven't fit any obvious pattern. Most happened on Interstate 10, a main route through Phoenix. Bullets have been fired at various times of the day, striking a seemingly random assortment of vehicles, from an empty bus to tractor-trailers to pickup trucks, cars and SUVs.

Many longtime Phoenix residents still remember the random shootings that terrorized the public a decade ago. Nearly 30 people were shot, and eight killed, including a cyclist who was riding down the street and a man who was sleeping at a bus stop. Two men were eventually caught and convicted.

The latest incidents also recall other random highway and roadside shootings, most notably the sniper attacks that terrorized the nation's capital more than a decade ago before two men were captured there.

A series of apparently random roadside shootings in northern Colorado earlier this year raised alarm that a serial shooter might be trolling areas roads.

A member of the task force investigating the northern Colorado shootings that left a cyclist dead and a driver injured called authorities in Arizona to see if there were any similarities, said David Moore, a spokesman for the Larimer County Sheriff's Office. Investigators found no links, he said.

A man was convicted last year of terrorism charges after opening fire on a busy Michigan highway because he believed the drivers were part of a government conspiracy against him. An Ohio man took shots at several cars and houses over several months in 2003, killing one person, before being caught and sent to prison.

FoxNews.com's Edmund DeMarche and The Associated Press contributed to this report