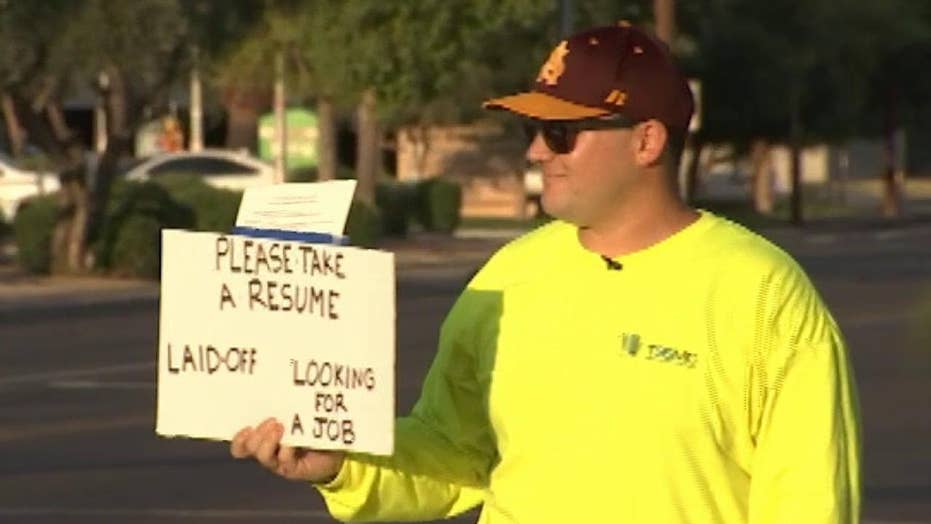 After being laid off, Patrick Hoagland took an unusual approach to finding a new job.

A laid-off Arizona worker found an unusual way to get the attention of prospective employers -- by taking it to the streets.

Patrick Hoagland told Fox News on Tuesday night that he had been laid off a month when he decided to get creative.

"I had been searching for a job online, filling out applications and sending companies my resume. I was also stopping at local businesses handing my resume out. After not getting responses I decided I needed to do something different," he told Fox News via email. "The idea of standing on a corner holding a sign popped in my head. I at first laughed and thought that was silly, but I kept thinking about it. I figured, why not?! There are millions of people in Phoenix driving around, someone might hire me. So I printed out a whole bunch of resumes and hit the streets."

Hoagland hit the streets of Arizona's capital city with a sign saying he was "laid-off" and "looking for a job," as Fox 10 Phoenix reported.  The sign also implored any passers-by looking for help to "please take a resume."

CHARO DESCRIBES HOW SHE 'HUGGED' HER HUSBAND AFTER HIS SUICIDE: 'I WAS FULL OF BLOOD'

The station reported on Hoagland's unusual job search Wednesday, saying that some passing drivers honked at the man while others stopped.

Hoagland told the station that after its initial report aired, "my phone just started going crazy [with] offers from multiple different people to come in and talk to them to come in and work."

He told Fox News: "I was offered a bunch of positions, probably almost a hundred. I narrowed it down to this one and one more with a rigging company."

One offer turned out to be just what he was looking for.

"I went on Saturday and worked to prove myself and they loved me," Hoagland added to the station. "I was offered a position - I work for Flatline Concrete Grinding Company."

He told Fox News he was so grateful to the owner who hired him: "Female contractor Kerry Burkhart has a wonderful company that I'm so happy to be a part of. She is the most honest, hardworking business owners I've ever had the pleasure of meeting and I'm so happy they reached out to me."