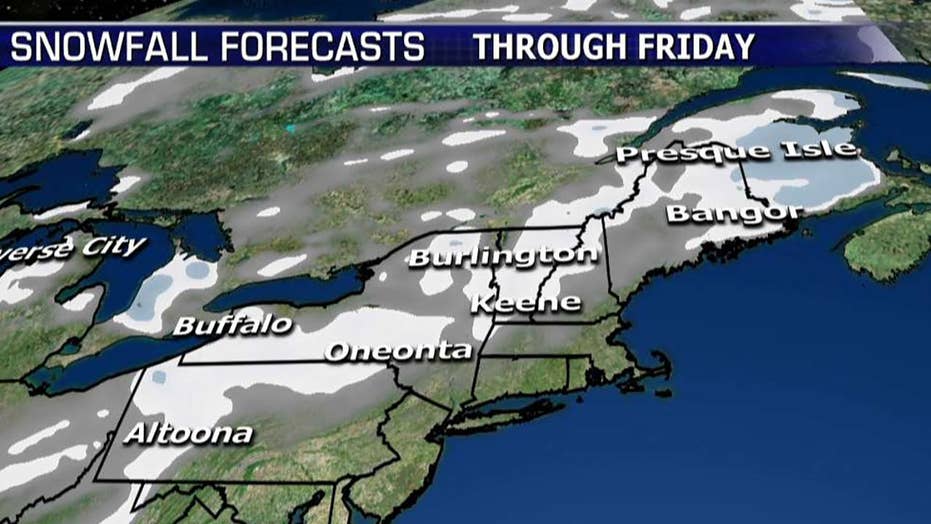 Better make sure to get your warm coat out of the closet, because temperatures are about to drop straight into winter.

The National Weather Service said an arctic-sourced airmass will be sweeping across the eastern two-thirds of the U.S. during the next few days, bringing heavy rain across the southern Plains on Wednesday before moderate and heavy snow is forecast over interior New England by Thursday.

"So this is our first storm system but I have to tell you, we have major cold air coming in Saturday, Sunday, Monday, Tuesday, and that will be a setup for measurable snow perhaps next week along the I-95 corridor," Fox News Senior Meteorologist Janice Dean said on "Fox & Friends." "You have been warned."

The NWS' Weather Prediction Center said light snow is forecast to develop over the Upper Midwest through Wednesday night, bringing the hazard of slippery roads before moving into the Great Lakes.

A storm system is bringing heavy rain across the southern Plains and snow into parts of the Northeast. (Fox News)

Up to four inches of snow could fall in parts of Wisconsin and Michigan before the system moves into the Northeast by Thursday night into Friday morning. Snow was already falling in Green Bay, Wisc,. on Wednesday morning as Lambeau Field, home of the Green Bay Packers, shared images and video on Twitter of the heavy frozen precipitation coming down.

Parts of interior New England, especially Maine, may see over six inches of snow before the storm moves out Friday night.

Several inches of snow is forecast across parts of the Northeast through Friday night. (Fox News)

Once the cold front and associated storm pass, arctic air will rush in and "dominate much of the eastern two-thirds of the country except Florida and the central High Plains," according to the WPC.

WINTER LIKELY TO BE WARMER BUT HAVE 'LARGE SWINGS' IN TEMPERATURES AND PRECIPITATION, NOAA SAYS

Temperatures are forecast to be more than 20 degrees below normal for large portions of the Midwest, Northeast and Mid-Atlantic.

A major blast of arctic air is forecast to move over the Midwest into the Northeast starting this weekend. (Fox News)

"Actual low temperatures are expected to dip into the single digits across the northern Plains by Sunday morning," the WPC said. "The arctic air will also promote the possibility of heavy lake-effect snow over the central Great Lakes by next Tuesday."

The NWS Twin cities that the air mass may bring temperatures to Minnesota that could break records set decades ago, in November 1986.

The cold air in place combined with another possible storm system may bring the chance for measurable snow to the Northeast again next week, but this time for the major cities on the Interstate 95 corridor, according to Dean.

A possible coastal storm may bring snow to the major cities in the Northeast by early next week. (Fox News)

While winter doesn't officially begin until Dec. 21, government forecasters have advised there may be some "large swings" due to volatile weather patterns. The National Oceanic and Atmospheric Administration said in its winter outlook that warmer-than-average temperatures are forecast for much of the U.S. this winter, with a wetter-than-normal season from December through February across the northern parts of the country.

The Farmers' Almanac, which says it bases its long-range forecast "on a mathematical and astronomical formula developed in 1818," has said "bitterly cold winter conditions" will be in place from areas east of the Rockies all the way to the Appalachians, with the coldest outbreak of the season arriving during the final week of January and lasting through the beginning of February.

The Farmer's Almanac said that this upcoming winter will be "filled with so many ups and downs on the thermometer, it may remind you of a 'Polar Coaster.'"