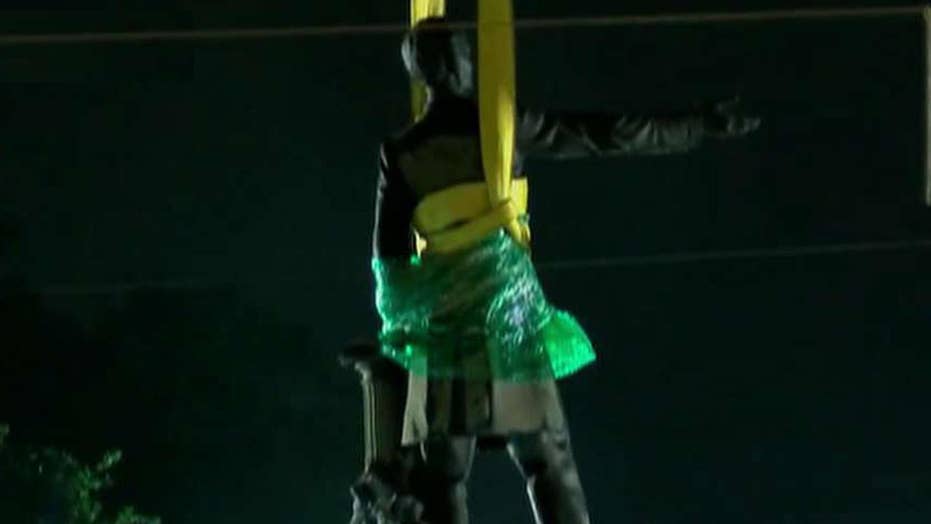 Statue of Jefferson Davis taken down in New Orleans

Removal met with both protests and chants of 'take him down'

NEW ORLEANS – Workers Thursday morning removed the statue of Confederate President Jefferson Davis in New Orleans, the second of four Confederate monuments slated for removal in a contentious, months-long process that has sparked protests on both sides.

As the statue was lifted from its perch on a grassy median along one of the city's main thoroughfares, a cheer went up from some of the dozens of protesters on the scene who have been pushing for the monument's removal. It was then lowered behind trucks encircled around the monument's base and out of view of media gathered on the scene.

A construction crew works to remove a monument of Jefferson Davis in New Orleans, Louisiana, U.S., May 11, 2017. REUTERS/Jonathan Bachman - RTS165PA

Removal of the statue — a larger-than-life image of Davis atop an ornate granite pedestal roughly 15-feet high — follows recent protests at the site by supporters and opponents of the monuments. City officials had refused to give advance public notice of the work because of threats of violence against contractors and workers involved in the effort. The statue was first unveiled in 1911.

Dozens of protesters both supporting the monuments and calling for their removal stayed up overnight to watch the proceedings which happened in early-morning darkness. The demonstrators were separated by metal barriers set up by the police and heckled each other from opposite sides of the barricade. About fifty police officers encircled the monument and kept watch on the protesters.

As preparation for removing the Davis statue, workers had wrapped the torso in a green wrapping and then placed a harness attached to a crane around the statue.

New Orleans Mayor Mitch Landrieu, who first urged the City Council to remove the monuments in 2015, praised the effort in a news release.

"These monuments have stood not as historic or educational markers of our legacy of slavery and segregation, but in celebration of it. I believe we must remember all of our history, but we need not revere it. To literally put the Confederacy on a pedestal in some of our most prominent public places is not only an inaccurate reflection of our past, it is an affront to our present, and a bad prescription for our future. We should not be afraid to confront and reconcile our past."

Late last month, the first structure — a 35-foot-tall granite obelisk known as the Liberty Place monument — was removed by masked workers under cover of darkness. The obelisk was a tribute to whites who battled a biracial Reconstruction government installed in New Orleans after the Civil War.

Protesters gather before a monument of Jefferson Davis is removed in New Orleans, Louisiana, U.S., May 11, 2017. REUTERS/Jonathan Bachman - RTS165QU

Also slated for removal are a bronze statue of Confederate Gen. P.G.T Beauregard on horseback, completed in 1915, which sits atop a stone platform at the entrance to the city's largest park and museum of art; and a statue of Gen. Robert E. Lee. The Lee statue is the most prominent of the four. Unveiled in 1884, the likeness of Lee stands atop a 60-foot-tall column in the center of a traffic circle on historic St. Charles Avenue. Monument supporters say each of the statues weighs tons and they feared moving the aging icons could result in significant damage.

The council voted to remove the monuments in 2015 — part of the national response after nine black parishioners were shot to death by an avowed racist at a church in Charleston, South Carolina, earlier that year. But the process of removing the statues was tied up for months in a court battle.

New Orleans is a predominantly black city of nearly 390,000. The statues were erected well before the civil rights era that brought African-Americans to political power. The City Council, now majority black, voted 6-1 to take the monuments down.

Landrieu, a white Democrat, was elected in 2010 and re-elected four years late with strong biracial support.