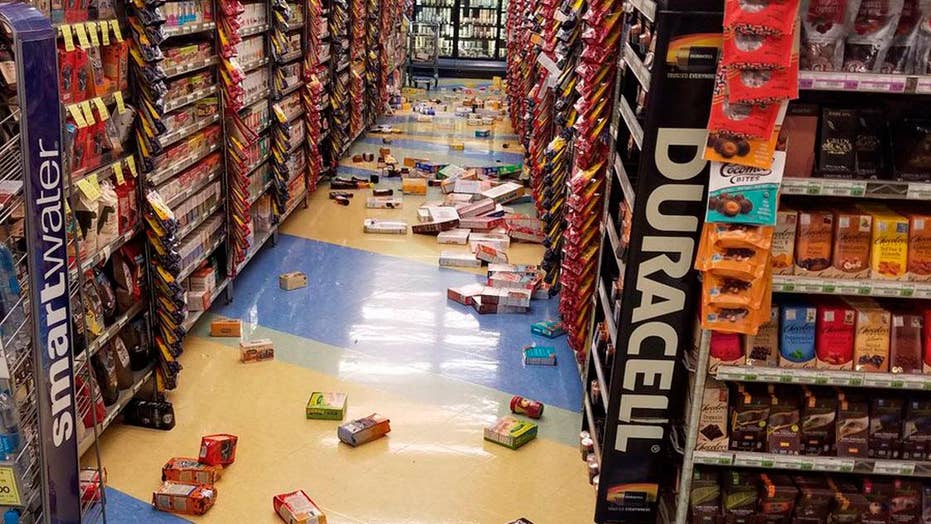 A powerful 7.0 earthquake rocked buildings and caused damage in Anchorage, Alaska; Ben English rode out the strong quake on the 10th floor of his office building.

Alaska was hit with a 7.0-magnitude earthquake Friday, centered just north of Anchorage.

The quake sent cracks up the walls of buildings and ripped up major roads.

Alaska averages about 40,000 earthquakes per year, with more large quakes than the other 49 states combined. Southern Alaska has a high risk of earthquakes due to tectonic plates — part of the Pacific Ocean's so-called "Ring of Fire" — sliding past each other under the region.

Read on for a look at the deadliest and most destructive earthquakes that occurred in Alaska.

With a magnitude 9.2, the Good Friday earthquake that rocked Alaska was reportedly the strongest ever recorded in North America. The March 27 quake was so strong it triggered tsunamis and landslides, along with other damage. It lasted a terrifying four and a half minutes. Overall, 131 people died, including 115 in Alaska and 16 in California and Oregon, according to the Alaska Earthquake Center.

A large earthquake occurred in the Lituya Bay in Alaska on July 9, 1958 — triggering a massive tsunami with waves that reportedly reached about 1,700 feet. Around Lituya Bay, the waves reached as high as 100 feet. At least two people on a boat in the bay, which was popular among fisherman, were washed away, according to Forbes.

The earthquake had a magnitude between 7.7-8.3, Forbes reported.

Nearly 160 people were killed in Hawaii after a 7.4-magnitude earthquake was recorded near Unimak Island or Aleutian Trench in Alaska on April 1, 1946, according to the University of South California's Tsunami Research Group. The earthquake triggered massive tsunamis, which took out a new Coast Guard lighthouse before devastating Hawaii. In all, 159 people were killed.