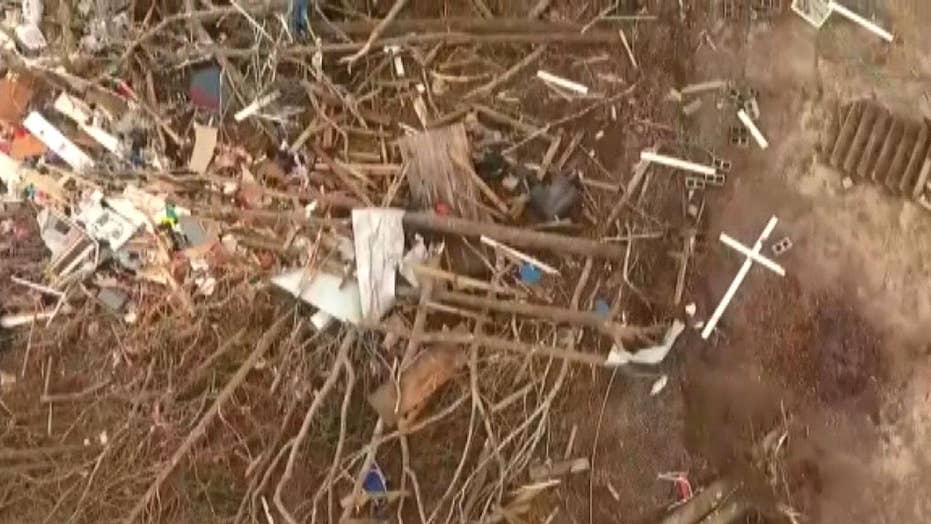 Raw video: The storms have left 23 dead, three of which were reported to be children.

Search and rescue teams in Alabama are using dogs and heat-detecting drones to search for victims of the deadly tornado that tore through the southeastern part of the state, as new drone video and photos show the scale of the devastation.

Lee County Sheriff Jay Jones said Tuesday at a news conference at least 23 people were killed and 90 were injured when the giant EF4 twister with 170 mph winds hit the rural community of Beauregard, and seven or eight people are still missing.

The death toll has not yet climbed from 23 as of Tuesday morning, according to Lee County Coroner Bill Harris. All 23 victims have been identified, and range in age from 6 to 93-years-old. One family lost at least seven people, according to Harris.

"It's a tragic situation," he told reporters.

Debris litters a yard the day after a deadly tornado damaged a home in Beauregard, Ala., Monday, March 4, 2019. (AP Photo/David Goldman)

Lee County coroner: All 23 victims of deadly Alabama tornado have been identified

Harris said that three children, ages 6, 9 and 10 were among the dead in Sunday's tornado.

Anyone with the last name Robinson, Tate or Stenson are among the family of seven that was killed, officials told Fox News.

Authorities said that crews were  "basically using everything we can get our hands on" to comb through what was left of homes.

"As the day goes on, there is hope we can transition from a search and rescue to a recovery status," Jones told reporters.

Debris from a home litters a yard the day after a tornado blew it off its foundation, lower right, in Beauregard, Ala., Monday, March 4, 2019. (AP Photo/David Goldman)

Jones said dogs were being brought in from across the state, in addition to dogs equipped with "infrared capability to detect heat signatures."

Friends in eastern Alabama are helping tornado survivors retrieve the scattered pieces of their lives after devastating winds destroyed their homes and killed at least 23 people. (Mickey Welsh/Montgomery Advertiser via AP)

Photos taken in the area on Monday show what was previously mobile homes tucked among tall pine trees now smashed into unrecognizable piles of rubble.

Tornado damage near Beauregard, Ala., on Monday March 4, 2019. (Mickey Welsh/Montgomery Advertiser via AP)

Toys, clothes, insulation, water heaters and pieces of metal were scattered across the hillsides where once towering pines were snapped in half.

Beauregard resident Carol Dean told the Associated Press that the body of her husband, 53-year-old David Wayne Dean, was discovered on the side of an embankment in the neighbor's yard.

Carol Dean, right, cries while embraced by Megan Anderson and her 18-month-old daughter Madilyn, as Dean sifts through the debris of the home she shared with her husband, David Wayne Dean, who died when a tornado destroyed the house in Beauregard, Ala., Monday, March 4, 2019. (AP Photo/David Goldman)

The metal base of the couple's trailer was bent into a U shape around a tree, she said.

"Our son found him. He was done and gone before we got to him," an emotional Dean told the AP. "My life is gone. He was the reason I lived, the reason that I got up."

Chris Darden, meteorologist-in-charge at the NWS' Birmingham office said at a news conference it was the deadliest tornado in the United States since the twister that hit Moore, Oklahoma in 2013. The storm had a track of at least 70 miles, "well into Georgia," according to Darden.

Debris from a home litters a yard the day after a tornado blew it off its foundation, at right, in Beauregard, Ala., Monday, March 4, 2019. (AP Photo/David Goldman)

Fox News' Charles Watson and The Associated Press contributed to this report.