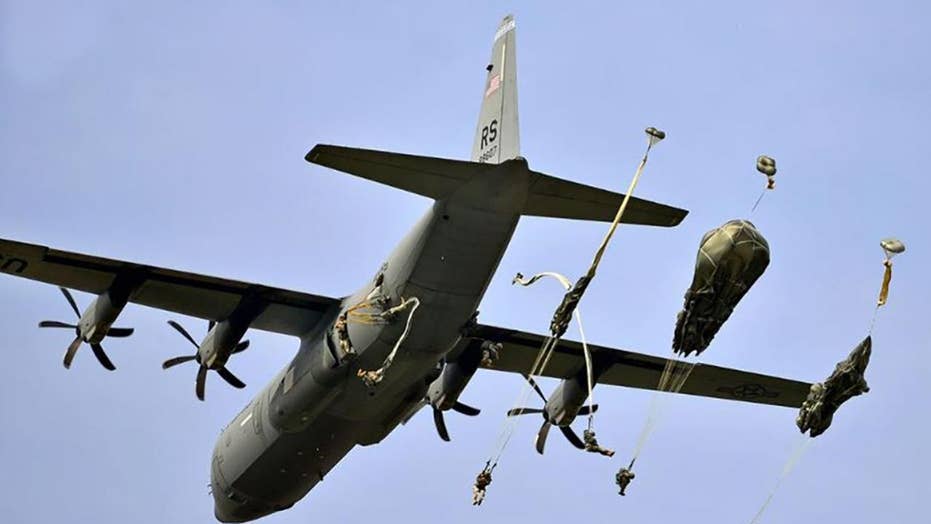 Nearly two dozen paratroopers injured in Mississippi Airborne exercise. Their training is expected to continue after all 89 are accounted for.

32 paratroopers were injured, and 18 of them hospitalized -- including one who suffered a broken back -- while conducting a training exercise in Mississippi on Wednesday night, officials said Thursday.

The injured were among 87 troops who were jumping from a C-130 aircraft when the wind blew them into pine trees, Laurel, Miss.'s WDAM-TV reported.

Some of the injured soldiers were rushed to a hospital and others had to be rescued after their parachutes become tangled in the trees.

The soldiers were among 650 jumping in to open a 10-day training exercise at Camp Shelby, a 134,000-acre National Guard site that includes a joint forces training center for active and reserve service members, officials said.

Staff Sgt. John Healy, with the 177th Armored Brigade at Camp Shelby, said none of the injuries were life-threatening.

He said 87 soldiers from the 4th Brigade Combat Team (Airborne), 25th Infantry Division landed in trees. At least four lodged so high up that the fire department had to help get them down.

Col. Christopher Landers, who represents the 4th Brigade, told WJTV News Thursday afternoon that rescue officials acted immediately to help the jumpers out the trees – an operation that lasted until 8 a.m.

Mississippi National Guard spokeswoman Lt. Col. Deidre Smith said soldiers continued to jump into the drop zone after the injuries, with units trying to account for their members.

The Mississippi National Guard released a statement just after midnight Thursday that read in part, “Airborne Operations all bear an inherent risk... We are grateful for overwhelming support that we have received from units here on Camp Shelby as well as local first responders. The entire community has come together to ensure that we are able to provide expert treatment to any soldiers who were injured during the Airborne operation.”

“Once all soldiers have been accounted for, our goal is ultimately to continue training. Despite the challenges that we currently face, soldiers always place the mission first.”