Assistant Clark County Sheriff Todd Fasulo said officers found the firearms inside the Mandalay Bay room of Stephen Paddock, and an additional 19 firearms at his home in Mesquite, Nevada.

Paddock killed 59 and wounded more than 500.

Police found rifles, equipped with scopes, and at least two of the guns in the cache were modified to make them fully automatic, two U.S. officials told The Associated Press.

“The crowd fled at the sound of gunshots. Imagine the deaths if the shooter had a silencer, which the NRA wants to make easier to get,” Hillary Clinton tweeted, adding: “Our grief isn't enough. We can and must put politics aside, stand up to the NRA, and work together to try to stop this from happening again.”

“I think before we start trying to talk about the preventions of what took place last night, we need to know more facts, and right now we’re simply not at that point,” Sanders said. “It is very easy for Mrs. Clinton to criticize and to come out, but I think we need to remember the only person with blood on their hands is that of the shooter, and this isn’t a time for us to go after individuals or organizations. I think we can have those policy conversations but today is not that day.” 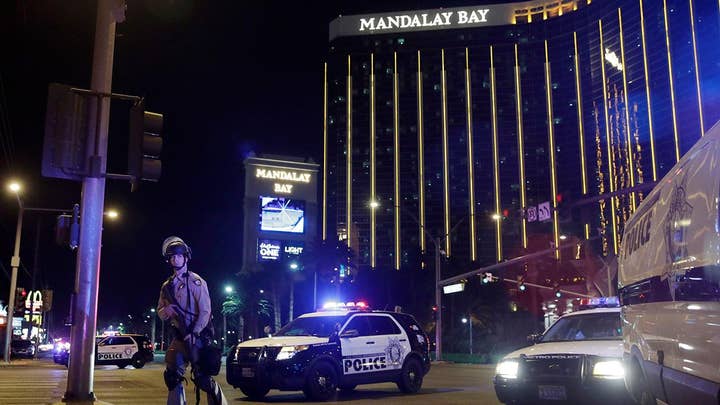 On Sunday night, Paddock shot down at the packed Route 91 Harvest Festival from the 32nd floor of the hotel, where he had been staying since Sept. 28. Officials said he booked one suite, with two rooms that had windows facing different directions.

Neighbors in Reno — where he had a home, in addition to a property in Mesquite — described Paddock as “extremely standoffish,” The Washington Post reported. One neighbor told the paper that Paddock occasionally revealed a refrigerator-sized safe when he opened his garage door, but otherwise kept the blinds drawn.

In addition to the firearms, investigators said they found explosives and several thousand rounds of ammunition at the gunman's Mesquite home.

Fasulo stressed that investigators believe Paddock was the sole shooter.