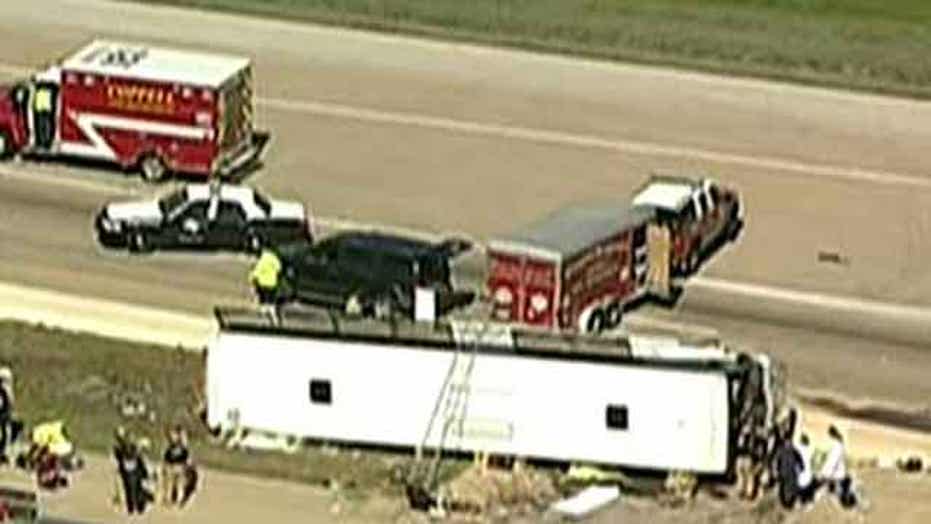 At least 2 dead in serious bus crash near Irving, Texas

At least two people were killed and more than 40 were hospitalized after a charter bus carrying dozens of passengers overturned outside Dallas Thursday morning during the rush hour commute.

The Cardinal Coach Line bus was on its way to a casino in Oklahoma when it suddenly weaved across the busy highway and struck two concrete barriers before toppling over in the center median, witnesses said. The wreck occurred along President George Bush Turnpike in Irving, just east of Dallas/Fort Worth International Airport, according to the Associated Press.

Trooper Lonny Haschel of the Texas Department of Public Safety identifies the dead as 69-year-old Paula Hahn, of Fort Worth, and 81-year-old Sue Taylor, of Hurst, a Fort Worth suburb.

Passengers had said Taylor, known to them as "Casino Sue," organized the trip to the Choctaw Casino Resort in Durant, Okla.

Authorities say 45 people were aboard the bus, 41 of whom were taken to Dallas-area hospitals for treatment. The 15 worst injured were taken to Parkland Memorial Hospital in Dallas, where four were listed in critical condition.

Witnesses say the bus may have blown a tire and rolled several times during the crash.

"Most of the people we pulled out were in shock, they're just crying, we were just trying to get them out and calm them down," said Robert Hare, who witnessed the crash.

Emergency vehicles could be seen swarming the bus as it lay in the grassy center median, and ladders were being used to access the vehicle. The bus was carrying about 45 people, most of them senior citizens, law enforcement officials said.

A man who answered the phone at Cardinal Coach's offices in Mansfield, just south of Dallas, confirmed that one of the company's buses was involved. But said he didn't have time to talk because he was trying to gather information about the crash.

Cardinal Coach has reported no crashes in the last two years that resulted in deaths or injuries, according to the Federal Motor Carrier Safety Administration. The company operates five buses and employs seven drivers, records show.

Cardinal Coach buses have been subjected to roadside inspections by the Texas Department of Public Safety three times in the last two years, according to Federal Motor Carrier Safety Administration records. The most recent was last Thursday, when the driver was cited for speeding and a violation relating to his logbook, neither of which led to an out-of-service order.

The federal agency also performed a compliance review of the company in May 2009, resulting in a satisfactory rating, records show.

Law enforcement officers were interviewing bus passengers and other drivers who witnessed the crash. The wreck occurred near an interchange with a second highway, snarling traffic for several miles.

"We ended up swirling and weaving and then ended up on the side," passenger Daniel Risik, 73, told The Dallas Morning News. "People were screaming and hollering, a very traumatic situation to say the least."

Risik said most of the passengers weren't wearing seat belts.

Another 15 patients were transported to Parkland Memorial Hospital, including the driver of the bus, and another victim was airlifted to a fourth hospital in critical condition, hospital officials said. Public transportation buses with Dallas Area Rapid Transit were used to transport some passengers with lesser injuries.

The National Transportation Safety Board is sending investigators to Irving, board spokeswoman Kelly Nantel said.