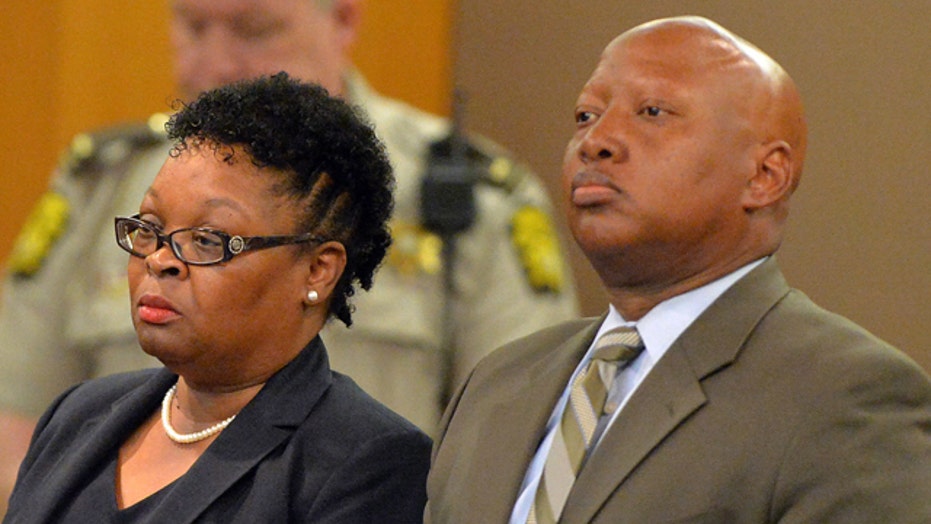 Prosecutors claimed the former educators participated in a conspiracy to cheat on standardized tests dating back to 2005, motivated by pressure to meet federal and APS standards and receive bonuses or keep their jobs. Many reached plea agreements, and some testified at the trial.

The educators said they faced pressure from supervisors — including former Superintendent Beverly Hall — to inflate students' scores to show gains in student achievement.

Hall was supposed to be tried along with the others, but her lawyers successfully argued she was too sick to help her own defense. She died last month from complications of breast cancer.

Prosecutors said the 12 former educators on trial were looking out for themselves, seeking bonuses for higher test scores rather than worrying about the education of the children they were charged with teaching. Defense attorneys said their clients were caught up in an overly broad prosecution that overreached in charging them with violating racketeering laws most often used for organized crime.

The entire process was lengthy: The months-long trial began in August with more than six weeks of jury selection, and testimony concluded in late February. The criminal investigation by the Fulton County district attorney's office lasted nearly two years.

The investigation involved at least 50 schools as well as hundreds of interviews with school administrators, staff, parents and students. The district has about 50,000 students.

The cheating came to light after The Atlanta Journal-Constitution reported that some scores were statistically improbable.

A state investigation in 2011 found widespread cheating on annual state exams that were used to determine whether schools met the federal No Child Left Behind law, with ties to extra funding. Investigators reported cheating in 44 schools with nearly 180 educators involved. They said Hall and her top staff "created a culture of fear, intimidation and retaliation" that threatened teachers or other educators who tried to report it.

Hall served as superintendent for more than a decade, which is rare for an urban schools chief. She was named Superintendent of the Year by the American Association of School Administrators in 2009 and credited with raising student test scores and graduation rates, particularly among the district's poor and minority students. But the award quickly lost its luster as her district became mired in the scandal.

In a video message to schools staff before she retired, Hall warned that the state investigation launched by former Gov. Sonny Perdue would likely reveal "alarming" behavior.

"It's become increasingly clear that a segment of our staff chose to violate the trust that was placed in them," Hall said. "There is simply no excuse for unethical behavior and no room in this district for unethical conduct. I am confident that aggressive, swift action will be taken against anyone who believed so little in our students and in our system of support that they turned to dishonesty as the only option."