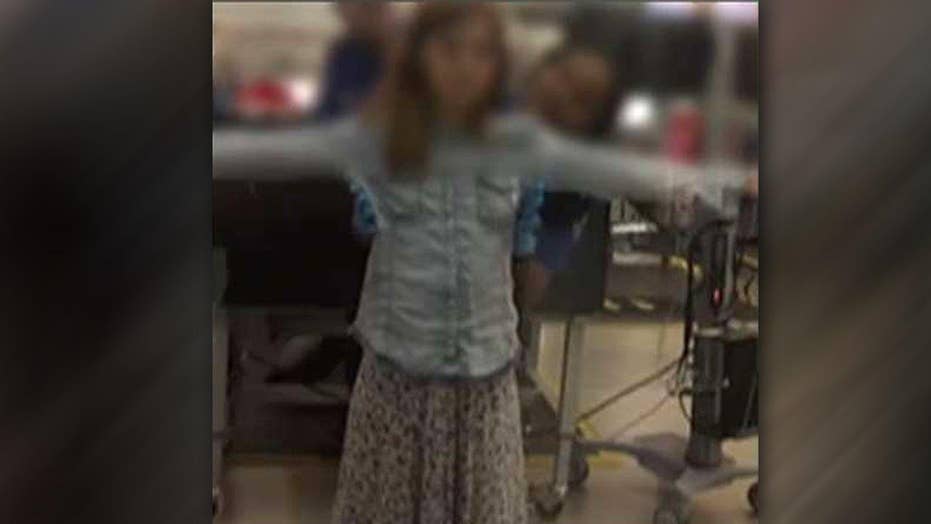 A California dad is livid after the discovery of a Capri Sun juice pouch in his 10-year-old daughter’s carry-on handbag led to an extensive frisking from a Transportation Security Administration agent – and he caught the entire uncomfortable encounter on video.

“Maybe the TSA agents were bad apples, maybe they were undertrained, maybe they need re-training, maybe they did everything by the book,” Kevin Payne, the girl’s dad, told WNCN. “I don’t really know. But it was an uncomfortable situation.”

Vendela Payne was subjected to the pat-down at Raleigh-Durham International Airport on Dec. 30 when an agent found the contraband juice container and a subsequent swab of the girl’s bag produced a false-positive for explosives. Liquids exceeding 3 ounces aren’t permitted in carry-on bags.

“I’m a very big proponent of security, and if they were patting me down, no problem,” Kevin told the San Diego Union-Tribune. “But this was a 10-year-old girl. The whole system seems to not work the way it should be working.”

During the more than 2-minute procedure, a female agent touches Vendela’s rear, chest and pelvic areas. The agent frisks the same areas numerous times during the lengthy process.

Payne said he was told by TSA agents that he would be arrested if he interfered in the pat-down, according to the Union-Tribune. So, Payne said, he made funny faces to try to keep his daughter calm.

“My dad was making funny faces, silly faces in the mirror and I felt like screaming the whole time,” Vendela told NBC7. “I know it’s to keep everybody on the plane safe, but she kept patting me down. Pat-down, pat-down. It was like, over and over.”

But the TSA isn’t backing down. Vendela’s pat-down “followed approved procedures,” according to a statement sent to WNCN. Other outlets received similar justifications.

“Since pat-down screening is conducted to determine whether prohibited items are concealed under clothing, sufficient pressure must be applied in order to ensure detection,” a TSA statement sent to the Union-Tribune said.

“What was going through my mind was, ‘This is annoying. I don’t like this,’” Vendela told The Today Show. “’I wanna run out the door.’”