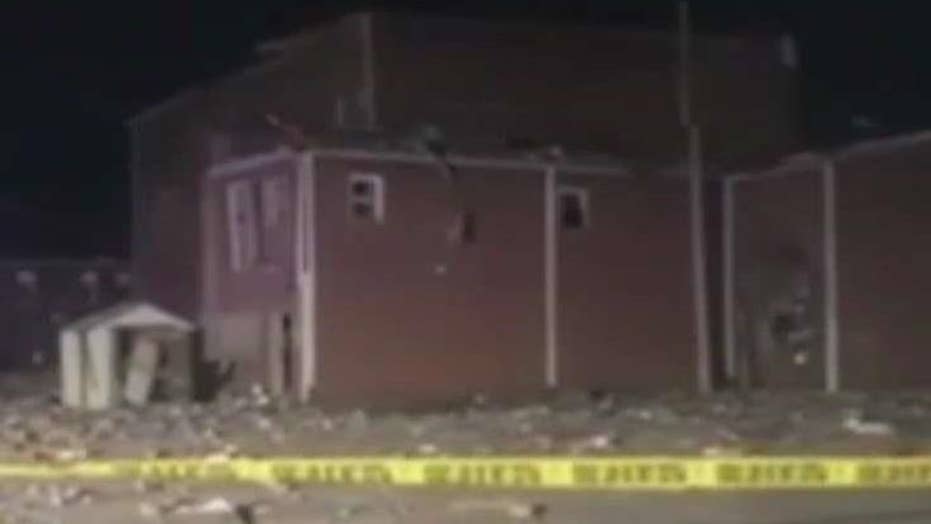 One dead, several injured, officials investigating cause of the blast

At least one person was killed and 10 others were injured in a large natural-gas explosion in Illinois Wednesday night.

The explosion occurred in Canton in an area around the downtown square at around 6 p.m., officials said. Several buildings were damaged.

According to WLS-TV, officials said 11 victims were taken to local hospitals. One later died at Graham Hospital in Canon. Another person with non-life threatening injuries was taken to OF Saint Francis Medical Center in Peoria, the station reported.

WMBD-TV reported that the man killed in the explosion was an Ameren Illinois worker.

Jill Dillefeld, of Canton, told the Peoria Journal-Star that she was eating dinner at Billy’s Tap about a block away from the downtown square when she heard the loud boom.

"All of the sudden, I heard the biggest kaboom, I have ever heard in my life," she told the paper. "I thought, 'Oh my God, it's lightning,' but then I realized it wasn't storming.

"Everyone jumped. The door, where I was sitting blew open," she added. The power flickered off and on and then people rushed outside, looked to the square and saw smoke.

Dillefeld said she saw a couple people in the rubble and stayed around the area until the first responders were able to come onto the scene and help the injured. She said she saw a few men critically injured.

"We have structural engineers in the area checking area buildings. This is a very slow and methodical process. They are working hard and as fast as possible," the agency said in a statement shortly after 9:30 p.m.

A nearby Salvation Army planned to open at 9 p.m. to shelter those who were displaced by the blast.