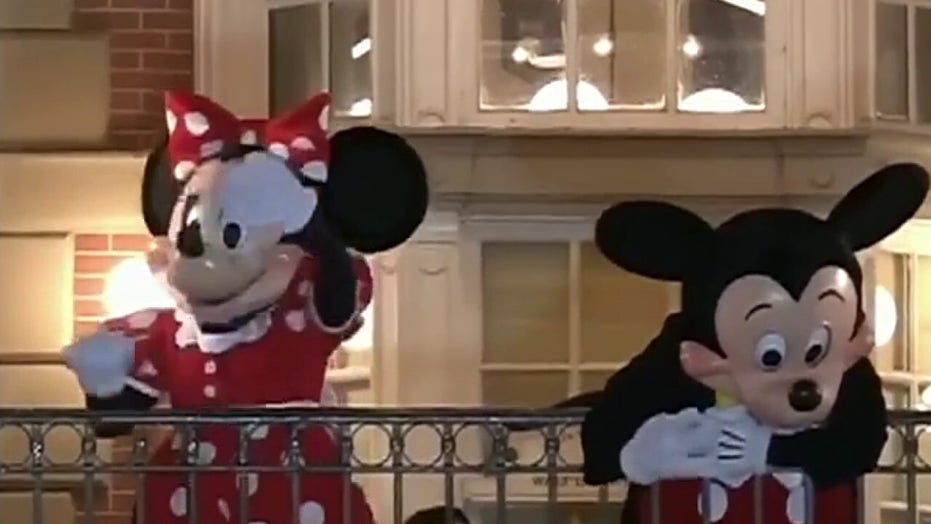 See you later, Mickey and Minnie.

The Walt Disney Company is closing all of its retail stores in North America and its Florida hotels at Walt Disney World Resort and Vero Beach for the time being during the COVID-19 pandemic. Theme parks Disney World and Disneyland closed over the weekend in a bid to fight the spread of the viral disease.

Guests gather on Main Street USA, in the Magic Kingdom at Walt Disney World in the final minutes before the park closed on March 15. (Joe Burbank/Orlando Sentinel)/Orlando Sentinel via AP)

Disney Parks News announced the updates on Twitter shortly after midnight on Monday. Officials cited guidance from the state and federal government, plus "an abundance of caution” and the "best interest" of visitors and employees, in making the difficult decision.

TRAVELING DURING CORONAVIRUS: SHOULD YOU POSTPONE SPRING BREAK TRIPS?

All Disney retail stores in North America will be closed starting March 17, the statement said. Also on Tuesday, all retail stores in both Downtown Disney in Anaheim, Calif., and Disney Springs in Orlando, Fla., will shut down.

Walt Disney World announced that all their park will be closed for the rest of March as a result of the coronavirus pandemic. (Joe Burbank/Orlando Sentinel)

Moving forward, non-Disney storefronts at the sites “will make decisions on whether to continue or adjust operations,” per the company.

In addition, Disney-owned and -operated hotels at Walt Disney World Resort and Disney's Vero Beach will close at 5 p.m. on Friday, March 20. It was previously announced that Disneyland Resort hotels would remain open until March 16.

Guests leave the Magic Kingdom at Walt Disney World in the final minutes before the park closed on March 15. Joe Burbank/Orlando Sentinel)

"We will continue to monitor the situation and maintain regular contact with appropriate officials and health experts,” a spokesperson for Disney told Fox News on Monday of the latest updates.

In earlier reports, authorities said that both Disney World and Disneyland would be closed until March 31 during the ongoing coronavirus outbreak.

With Minnie and Mickey Mouse, Walt Disney World President Josh D'Amaro waves to guests gathered on Main Street USA, in the Magic Kingdom in the final minutes before the park closed on March 15. (Joe Burbank/Orlando Sentinel)/Orlando Sentinel via AP)

As seen in photos captured by the Associated Press on Sunday night, Disney World guests gathered on Main Street USA in the Magic Kingdom for an emotional “farewell” (for now) to the theme park. Walt Disney World President Josh D'Amaro joined Mickey and Minnie Mouse to wave goodbye to visitors before the park closed for the rest of March.