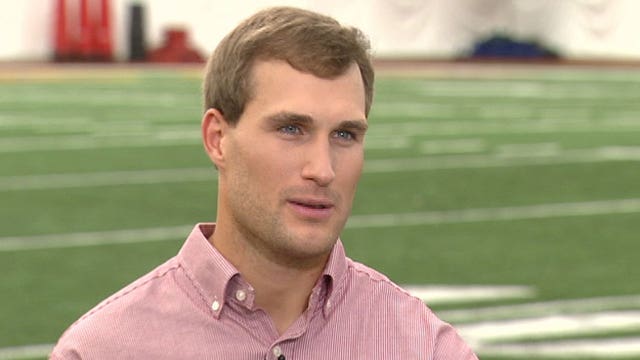 NFL quarterback on how football allows him to help others

Being an NFL quarterback is a demanding job, mentally and physically, but that didn't stop Minnesota Vikings quarterback Kirk Cousins from taking the time to read the entire Bible.

Cousins, who has been outspoken about his Christian faith, shared a photo of his personal Bible with a Fellowship of Christian Athletes logo on it last week.

"It took me over two years, but just finished reading through the entire Bible for the first time," Cousins wrote in a tweet liked by more than 90,000. "Def recommend it."

The football star's Twitter bio quotes Micah 6:8, "What does the Lord require of you? To act justly, love mercy and walk humbly with your God." He is not afraid to be open about his faith -- and is proud of it.

“My faith is important to me, it’s the foundation for my life,” Cousins said in a post-game interview earlier in the season, according to CBN. “Ultimately there’s where I gain my peace and strength. Win or lose today, God’s still on the throne and I take comfort in that.”

However, sometimes faith has been a lightning rod for NFL stars. Earlier in the season, New Orleans Saints quarterback Drew Brees drew heat from LGBTQ groups after he promoted Focus on the Family's "Bring Your Bible to School Day," and more recently, Green Bay Packers quarterback Aaron Rodgers called religion a "crutch" as he lamented his Christian upbringing.

Cousins and Vikings were two wins away from a trip to the Super Bowl. They were unable to upset the San Francisco 49ers, who are set to play against the Kansas City Chiefs in Super Bowl LIV.