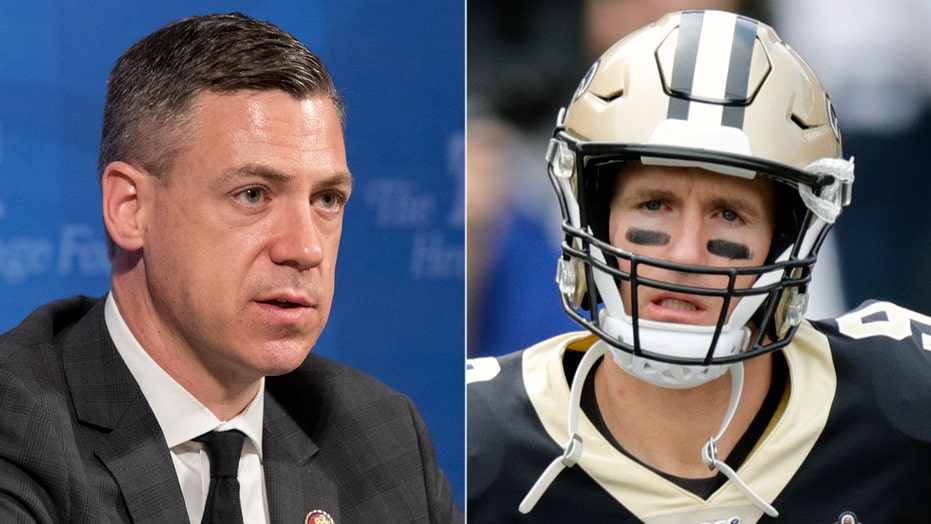 New Orleans Saints quarterback Drew Brees has received support from NFL fans and players alike, but now he's getting support from a group in Congress, after being targeted by left-wing activists for being involved with a conservative Christian group.

Rep. Jim Banks, R-Ind., joined by 20 other members of Congress, signed a letter Wednesday night saying, "Americans across the country support your promotion of Bring Your Bible to School Day," set for Thursday, Oct. 3.

Brees, an anti-bullying advocate, had to go on defense after encouraging students to "share God's love with friends" in a 22-second video promoting the event sponsored by Focus on the Family. The local news outlet, Big Easy Magazine, called the group "one of the most well funded anti-LGBT organizations in the country" for supporting traditional marriage before gaining traction.

“Drew Brees has backers in Congress," Banks told Fox News. "I hope our letter is an encouragement to him and other people of faith.”

"Unfortunately, while you never mentioned LGBT groups, mean-spirited antagonists have attacked you for associating with an organization with ideology different than their own," the members, including Rep. Mark Meadows, R-N.C., said. "These attacks are short-sighted and frankly un-American."

Congressional letter to Drew Brees by Caleb Parke on Scribd

"I applaud you for standing up for your faith and encouraging children to do the same," Banks wrote. "By your actions, you have proven yourself a role model for young Americans across our nation. They look up to you, as do we and many others. Do not let the antagonists get under your skin."

Over half a million students participated in the faith-based, student-led event last year.

Brees responded in a video posted online and then in a press conference.

“I live by two very simple Christian fundamentals,” he said in the clip, which can be viewed below. “Love the Lord with all your heart, mind and soul, and love your neighbor as yourself.”

“I’m not sure why the negativity spread or why people tried to rope me into certain negativity,” he continued. “I do not support any groups that discriminate or that have their own agendas that are trying to promote inequality. … That’s not what I stand for.”

Focus on the Family president Jim Daly also defended the Super Bowl champion and clarified that the Colorado-based organization is not a hate group.

“Our goal is to say, ‘Jesus loves you, cares about you, no matter who you are — your race, your creed, your sexual orientation Jesus died for every one of us,’" Daly said. "That's the message we want to get out."