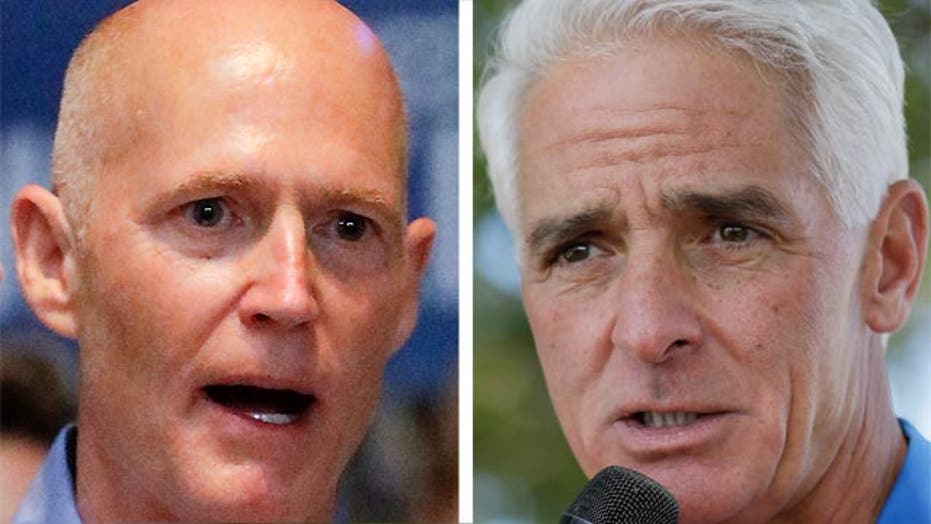 A staggering number of U.S. governors are in political peril ahead of next week's elections, setting the stage for a potentially historic wipeout from Alaska to Florida if incumbents can't hold on.

Of the three-dozen governors facing re-election this year, estimates and surveys generally show about 10 incumbents either trailing or running close to even in their races. One survey, from Governing magazine, pegs the number at 18, including eight “competitive” races.

If the challengers can rally, it will be a year for the history books. The last time 10 or more governors lost was in 1962, when 11 out of 26 were defeated.

“We could easily see [a record], because all of these toss-ups are really, really close,” said Louis Jacobson, who handicapped the races for Governing.

The incumbents in Governing’s 10 "tossup" races are a mix of seven Republicans and three Democrats and include such high-profile state leaders as Colorado’s John Hickenlooper, a Democrat, and Florida’s Rick Scott, a Republican.

A survey by The Washington Post lists 10 tossups, while University of Virginia professor and political analyst Larry Sabato puts the number at seven. All three surveys show Pennsylvania Republican Gov. Tom Corbett -- who is trailing Democratic challenger Tom Wolf by double-digits in the polls -- headed for defeat.

What exactly is driving the tight electoral landscape this year is likely a mix of factors.

Jacobson argues that several Republican governors are on the endangered list because they were elected in Democrat-leaning states in the 2010 GOP wave election. In some states, Democrats have been able to rebound. He also points to overall dissatisfaction with incumbents, though cautions that record-level voter disapproval for Washington doesn’t necessarily trickle down to governors.

Caleb P. Burns, a Republican adviser and attorney with the Washington, D.C., law firm Wiley Rein LLP, agrees that the political map is indeed significant, pointing out that nearly half of the imperiled governors are Republicans in Democratic-leaning or swing states.

“It may simply be the wave is receding,” he said. “The Republican governors elected in 2010 might not be able to make a strong enough argument again to dispel constituents of their predispositions.”

Democrats are embattled, too.

The rise and fall of Colorado's Hickenlooper, who made all three lists, appears to be a product of both his own decisions and circumstances beyond his control.

He enjoyed strong approval ratings early in his term while working with a GOP-led House, only to see them unravel after voters gave Democrats control of both chambers in 2013.

Hickenlooper signed more than 400 bills last year, including ones on the environment and gun control that infuriated conservatives in the swing state.

“Doing so much so fast in one year was a big bite to take,” the first-term governor recently told Governing, a nonpartisan publication focusing on state and local government.

And he conceded in a recent debate against Republican challenger and former Rep. Bob Beauprez that Colorado was “reckless” last year in legalizing recreational marijuana.

Beauprez leads by 2 percentage points, 45-to-43 percent, according to an averaging of polls by the website RealClearPolitics.

In Florida, Scott has steadily closed the lead of front-running Democratic challenger Charlie Crist -- in one of the oddest, tightest and most expensive gubernatorial races.

Crist, a former Florida Republican governor, has twice changed political parties. He also triggered a bizarre incident when he brought a fan on stage before a recent debate, which resulted in Scott delaying the start -- and a barrage of media coverage mocking the dispute.

The $62.7 million spent so far on TV ads, according to a Center for Public Integrity media analysis, helps make it the one of the costliest gubernatorial races of the year.

Scott, along with Republican governors in Maine and Michigan, were elected in Democrat-leaning states in the 2010 election.

Jacobson, though, points to a few outlier, toss-up races in which GOP incumbents are in jeopardy of losing in Republican-leaning Alaska, Kansas and Georgia.

In Kansas, Gov. Sam Brownback, for example, appears to have alienated voters with his strong conservative agenda that has included pushing tax cuts resulting in state budget problems and eliminating teacher tenure.

In Alaska, Parnell is the victim of an unusual political wrench called a “fusion ticket.” Democratic nominee Bryon Mallott quit the race to become lieutenant governor for Republican-turned-independent Bill Walker, in an effort to team up and oust Parnell.

In Wisconsin, which like Colorado has a history of electing Democratic and Republican governors, embattled GOP Gov. Scott Walker is again fighting to keep his post, landing him in the tossup category.

Walker's successful 2011 efforts to roll back collective bargaining powers for most public employees -- to help reduce the state's budget deficit -- resulted in a 2012 recall election that he survived.

Republicans continue to strongly support Walker, but polls show very little Democratic support in a race that will likely hinge on voter turnout.

He and Democratic challenger Mary Burke are now virtually tied, according to RealClearPolitics. President Obama is heading to that state late Tuesday to try and boost Burke's candidacy.