Sen. Amy Klobuchar, D-Minn., is expected to launch her 2020 presidential campaign on Sunday, but is facing an early crisis over a wave of accusations that she has mistreated staff -- with her conduct reportedly getting so bad that then-Senate Minority Leader Harry Reid told her to change her behavior.

Klobuchar is expected to announce her 2020 run in Minneapolis on Sunday. But that announcement was overshadowed this week when HuffPost reported this week that Klobuchar has such a bad reputation over her treatment of staff that a number of potential staffers have withdrawn from consideration to manage her campaign because of it.

The left-wing outlet reported that staffers described Klobuchar as “habitually demeaning and prone to bursts of cruelty,” although others said that while working for Klobuchar was challenging, it was also rewarding. Some pushed back and questioned whether those making the accusations “were falling for sexist stereotypes about female leaders with high standards.”

Klobuchar’s team issued a lengthy statement saying she is “proud” of her staff.

"Senator Klobuchar loves her staff — they are the reason she has gotten to where she is today. She has many staff who have been with her for years — including her Chief of Staff and her State Director, who have worked for her for 5 and 7 years respectively, as well as her political advisor Justin Buoen, who has worked for her for 14 years — and many who have gone on to do amazing things, from working in the Obama Administration (over 20 of them) to running for office to even serving as the Agriculture Commissioner for Minnesota," a campaign spokesperson told HuffPost. "She is proud of them and the work they have done for Minnesota."

But since the outlet published its first story, more stories of alleged mistreatment emerged. Former staffers said that Klobuchar’s wrath left employees in tears, and that one was accidentally hit with a flying binder, according to ​​​​BuzzFeed News.

“I cried. I cried, like, all the time,” said one former staffer.

While BuzzFeed also received some positive stories from former staffers (one said Klobuchar threw her a baby shower and cooked a meal for her friends and family), it noted she has one of the highest turnover rates of staff in the Senate. 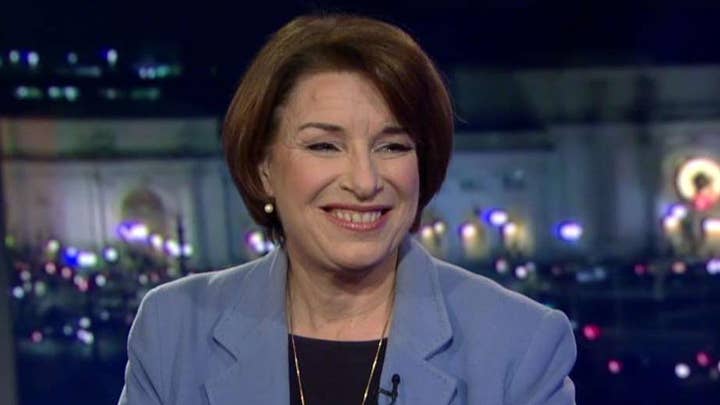 Klobuchar would reportedly blow up about anything from minor grammar mistakes, the use of the word “community” in press releases, or failing to charge her iPad.

On Friday evening, HuffPost published a story filled with new allegations, including that she required staff to perform personal duties such as washing dishes. Such a demand would be in violation of the Senate’s rules and federal law against personal use of the office, it said.

The outlet cites a 2012 campaign memo that includes demands such as “only speak when spoken to at events” and telling staffers that while waiting for her in a dressing area or bedroom they should pick up her dirty laundry and place it in a basket. The memo included the following passage:

“Especially while in the car during a busy day: if she is EXTREMELY upset about something, let her rant through it, DON’T interupt [sic] her unless ABSOLUTELY necessary and be careful when trying to calm her down...Often she just needs to talk things out in the open and is not interested in other people’s opinions -- this is something that you will become used to and adjust to -- its just a note for the first time this happens.”

The allegations of mistreatment were reportedly well known to other senators as well. HuffPost reported that Reid spoke to Klobuchar in 2015 about her mistreatment of staff. A Reid spokesman told the outlet that he didn’t remember if he had such a discussion, and instead described her as “one of the most brilliant, hard-working members of the Senate.

According to HuffPost, a former aide to then-Sen. Al Franken, D-Minn., said that a terrified Klobuchar staffer came up to them to explain Klobuchar’s lateness to an event: “I’m supposed to tell you...Senator Klobuchar is late today because I am bad at my job.”

If Klobuchar announces a candidacy, she will likely enter a crowded field that already includes Sens. Kamala Harris, D-Calif., Cory Booker, D-N.J. and Elizabeth Warren, D-Mass. On Friday, she teased the announcement again, releasing a video in which she said she would be making it on Boom Island.

"As in boom, drop the mic," she quipped.