The plan would move America to 100 percent clean and renewable energy by 2030; David Spunt reports.

Seven senators either running for the Democratic presidential nomination or seriously weighing White House bids have signed on as co-sponsors to the Green New Deal, the sweeping proposal unveiled in Congress Thursday that aims to transform the country’s economy to combat climate change -- while enacting a host of new welfare programs.

And it's giving Republicans ample political ammunition as they up their attacks on the Democrats hoping to oust President Trump from the Oval Office in 2020.

Heading into the next campaign cycle, the plan in a matter of hours has emerged as a striking foil for Republicans who, as Trump did during Tuesday's State of the Union address, have vowed to stave off a socialism-inspired policy creep in America.

“All of these policy litmus tests that are being applied to the 2020 field are a goldmine for us,” said Sarah Dolan, executive director for conservative PAC America Rising. “They’re all falling over each other to be the first to sign on to them, to be supportive. And it’s just exemplifying the race to the left.”

She then highlighted that “it’s not just some fringe idea. Nearly every 2020 Democrat supports it.”

She may be exaggerating a bit -- not every Democratic presidential contender is embracing the proposal. But many of the heavyweights are signing on board the nonbinding resolution which spells out a “10-year national mobilization” as massive as the original New Deal to turn the economy away from fossil fuels and supplant them with renewable energy sources like solar and wind power. It includes a range of other proposals covering guaranteed jobs, universal health care and more that critics say would cost trillions all told.

"I wonder if Democrats who represent middle-class and poverty stricken districts will fight the Green New Deal, as it would be devastating to their constituents," Trump campaign manager Brad Parscale tweeted.

But while critics argue the proposals are a “socialist manifesto,” supporters say the guidelines would create thousands of jobs in renewable energy. Democratic presidential candidates have gone all in on the agenda.

Sen. Kamala Harris of California, who launched her presidential campaign last month, warned in an email to supporters on Thursday that climate change is an "existential threat to our country, our planet, and our future." 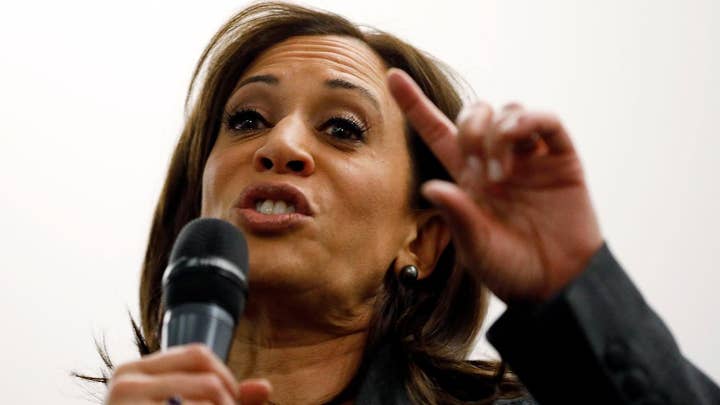 She called the Green New Deal “a bold plan” that “will repair our country’s crumbling infrastructure, upgrade buildings across the nation, and dramatically cut greenhouse gas emissions."

Also getting behind the plan are Sens. Amy Klobuchar of Minnesota, who’s expected to launch her campaign on Sunday, and Jeff Merkley of Oregon, who’s seriously considering a presidential run.

Independent Sen. Bernie Sanders of Vermont, who’s likely to launch a second straight campaign for the Democratic nomination, is also a co-sponsor.

But not everyone’s getting on board the bill, even as it becomes a virtual litmus test for 2020 Democratic presidential contenders.

Former New York City mayor and billionaire media mogul Mike Bloomberg, who’s a champion in the fight to combat climate change, said last month in New Hampshire, "I'm a little bit tired of listening to things that are pie in the sky, that we never are going to pass or never are going to afford."

"I think it's just disingenuous to promote those things. You've got to do things that are practical,” added Bloomberg, who’s seriously weighing a White House run.

While some Democrats – including House Speaker Nancy Pelosi – raised questions about the ambitious blueprint, Republicans didn’t hold back and made a point of calling out some of the more fantastical elements of the plan.

In a post titled “Congratulations! You get a NEW HOUSE,” the RNC criticized a section that calls to “upgrade or replace every building in US for state-of-the-art energy.”

The plan is the latest development to fuel GOP efforts to cast the Democratic Party as appealing to the fringe, coming amid several state-level debates over late-term abortion bills -- an issue also mentioned in Trump's State of the Union.

“The Trump campaign, we’ve been talking to Trump’s political advisors, it’s like Christmas and Hanukkah and every other holiday has arrived. I’ve never seen them so joyful and full of glee. They’re gonna elevate this and talk about it 'til the cows come home,” Axios reporter Jonathan Swan told Fox News on Thursday during an appearance on “Special Report.”