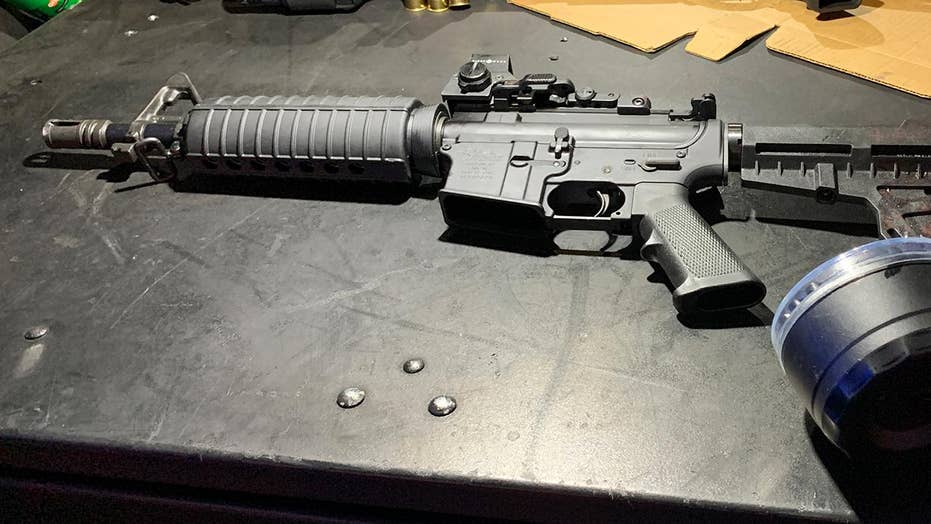 This is a rush transcript from "Special Report," August 14, 2019. This copy may not be in its final form and may be updated.

REP. NANCY PELOSI, D-CALIF., HOUSE SPEAKER: We must have gun violence prevention legislation. We need to do it soon. We've sent the bill over to the Senate.

REP. KEVIN MCCARTHY, R-CALIF., HOUSE MINORITY LEADER: The Senate should actually pass a bill that actually works. That bill does not give you meaningful background checks.

SEN. KIRSTEN GILLIBRAND, D-N.Y., PRESIDENTIAL CANDIDATE: We need to fight against Mitch McConnell by asking. We need a vote on it right now. If we had a vote today, we could pass universal background checks.

DONALD TRUMP, PRESIDENT: He wants to do background checks, and I do too, and I think a lot of Republicans do. I don't know, frankly, that the Democrats will get us there.

BRET BAIER, HOST: Talking about background checks, the bill that's pending in the Senate, and the president saying he wants to push Mitch McConnell to do it. We have some new FOX polls out tonight about proposals to reduce gun violence. Require background checks, 90 percent of those polled favor that. Take guns from at-risk people, 81 percent. Ban assault weapons, you see those are high numbers.

You look at newest poll for the president's job performance taking a dip a few points from July, and you can see the disapproval there at 56 percent.

MARC THIESSEN, AMERICAN ENTERPRISE INSTITUTE: The problem with background checks is obviously -- first of all, we do have background checks. They are talking about dramatically expanding background checks. So for example, if I give my gun to my neighbor whose husband has been beating her to protect yourself, I'd have to do a background check on her. It would criminalize that. So it's not quite as simple as that.

But this is also a ridiculous debate, because background checks wouldn't have stopped these shootings. It has nothing to do with what happened in El Paso or Dayton. What could have stopped that are red flag laws. And our FOX News poll, which we just got, that's something where we have really strong bipartisan support, 88 percent of Democrats and 75 percent of Republicans support red flag laws.

So the problem seems to be is that whenever these mass shootings happen, the Democrats do two things. They blame Republicans and they try and politicize it, and then they go for gun control measures that have nothing to do with the shooting. We should try and be focusing in a bipartisan -- putting politics aside and focusing in a bipartisan way on things that could actually prevent future shootings.

SUSAN PAGE, WASHINGTON BUREAU CHIEF, "USA TODAY": Background wouldn't stop every student. Background checks would stop some shootings. And you look at the disconnect there, overwhelming majorities support all three of these measures, including renewing the ban on assault-style weapons. But what is the expectation Congress will act? Fewer than one in five in your poll say they think Congress and the White House will actually pass any of these laws despite the support that is there for that.

BAIER: FOX poll six, rather live in a country where it's legal to own guns or guns are banned, and you look at legal to own guns at 57 percent. It will come back. This is a political issue that always comes back to that moment.

TOM BEVAN, REAL CLEAR POLITICS CO-FOUNDER: Yes. And what's interesting too -- excuse me -- is that Democrats and Republicans the polls show are living into separate universes. Democrats say the problem behind the gun issue is easy access to guns and white nationalism. Those are the top two things. Republicans, meanwhile, say it's mental illness and parenting issues. So there isn't very much common ground in terms of where the parties feel the core of the problem is, and that's why I think we're looking at -- it's going to be tough to get 60 votes in the Senate.

BAIER: But in reality, if the president is pushing for, if Mitch McConnell says we're going to have a vote, could potentially something get done, even if it doesn't deal with everything Marc is talking about?

BEVAN: Right now it seems like the red flag la might have the best chance because you do have bipartisan support in the Senate with Lindsey Graham pushing it. If the president gets behind that, as Marc pointed out, there is broad public support for it. So maybe that's one area where something could get done.

BAIER: Shortened panels because of the breaking news in north Philadelphia, six police officers shot. We're monitoring, still an active shooter situation, getting updates here. We'll bring them to you on the other side of the break. We will talk about the economy, what happened today on Wall Street, and China, next.

BAIER: Wouldn't you hate to be the company that's there cheering on this day? It was not a good day. The Dow taking a drop of 849 points, and the other industries didn't do much better across the board. A lot of fears about a possible recession. The Treasure yield spread, the bond yield chart, it's in the weeds, but essentially has been an indicator before of recessions to come.

Meantime, the president tweeting out just moments ago about China and the concerns about China. There you see on the screen, "Good things were stated on the call with China the other day. They're eating the tariffs with the devaluation of their currency, pouring money into their system. The American consumer is fine with or without the September date, but much good will come from the short delay -- deferral to December. It actually helps China more than us, but we'll be reciprocated. Millions of jobs are being lost to China and other non-tariffed countries. Thousands of companies are leaving. Of course, China wants to make a deal. Let them work humanely with Hong Kong first."

We're back with the panel. Susan, the president delaying these tariffs, but clearly there's a concern about the economy overall, globally and here.

PAGE: And the China trade war has been part of the concerns about the economy. It's interesting, though at the end of that tweet that he suggests that he will tie China tariffs to what happens in Hong Kong, and that is different. That goes further than what he's done before in talking about the violence in Hong Kong. That is a new step he is signaling there.

THIESSEN: That's a good step in the right direction, because his neutrality on Hong Kong so far has been terrible. First of all, from a moral perspective, this is like what Obama did with the Green Revolution in Iran where the people were rising up and he didn't support them, and we're having a redux of that. And two, it's not smart negotiating strategy because if you really want to squeeze China, you want to squeeze them everywhere they are vulnerable, including on Hong Kong.

Xi Jinping is a vice in Hong Long because Hong Kong is the golden goose. The Chinese economy is stagnating and some people would say contracting. Trump's tariffs are hitting them hard. If he cracks down in Hong Kong, you're going to see capital flight, you're going to see talent flight. You're going to seek real problems there. So Trump should be using this both from a moral standpoint to stand with people of Hong Kong, but also if he's seen as weak and not pressuring him, he's not going to get a good trade deal.

BAIER: This is 30 years after Tiananmen Square. This is a big moment for Hong Kong and for China, and for the global economy if he is doing that direct tie with this.

BEVAN: Marc is exactly right. Hong Kong is -- it is the jewel. And once trust is lost in Hong Kong as a capital market, a financing market, all of that, then it's not coming back. And so China is in a very precarious position in terms of dealing. They don't want this to escalate. And it looks like things have deescalated in the past, just in the past few hours.

But as to the markets -- look, market watchers will tell you they hate to see the market and on a down note, lows at the end. They always want to see an uptick at the end of the market. The bond market has people really rattled, and so we could be in for a rough ride.

BAIER: There are some people talking the country into recession when we get into politics, but when you start seeing the signals, it does send out flares.

PAGE: And it can be a self-fulfilling prophecy. If people become very concerned that there is a recession about to come, they will make economic decisions to protect themselves that make it more likely there will be a recession.

BAIER: Panel, thank you. When we come back, something to make you feel good.

UNIDENTIFIED FEMALE: That's your dress so you can wear it to church.

UNIDENTIFIED FEMALE: You're so sweet.

BAIER: Uber driver Lamiyah Jabbar picked up Diane there for work in Buffalo, New York, found out she had some financial struggles. Diane wanted a new dress for church and a pair of shoes. They were just chatting in the car, but she would not be able to afford them until Christmas.

After dropping her off, Jabbar decided to get her a new dress and a $50 Visa gift card, a random act of kindness, and that's just pretty good. After the day like today with all these stories and all these things, that story, plus we thought we'd leave with puppies, because you should just see some puppies to finish the show. And puppies can make you smile, and that's a good thing.

Thanks for inviting us into your home tonight.