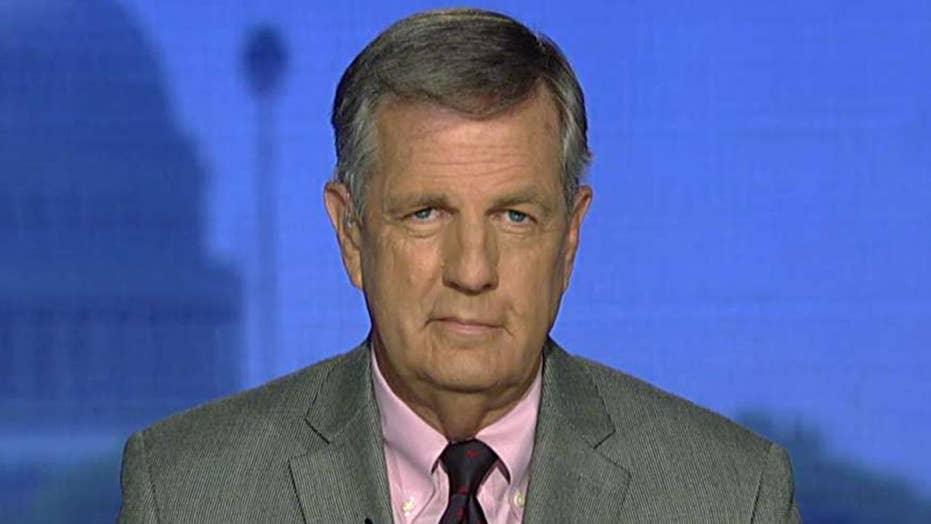 Brit Hume: Nancy Pelosi doesn't want 'all the oxygen' in Washington to be consumed by the Mueller report

Fox News senior political analyst Brit Hume said on “America’s Newsroom” on Thursday that House Speaker Nancy Pelosi “doesn't want all the oxygen in Washington and in politics to be consumed by the fight over the Mueller report and the failed effort to prove collusion with the Russians.”

He made the comments shortly after Pelosi, D-Calif., alleged Thursday that Attorney General William Barr had “lied to Congress” and reportedly told colleagues in a closed-door meeting that he committed a crime -- prompting a fiery rebuke from the Justice Department.

Pelosi addressed the issue publicly during a press conference, hedging a bit on the question of whether he committed a crime with his prior testimony.

“He lied to Congress. And if anybody else did that, it would be considered a crime,” she told reporters. “Nobody is above the law. Not the president of the United States. Not the attorney general.”

“It is interesting to see what she’s trying to do there because she doesn't want all the oxygen in Washington and in politics to be consumed by the fight over the Mueller report and the failed effort to prove collusion with the Russians,” Hume said in response.

“So she tried to weave into her discussion, as you saw there, to connect all this to the legislative agenda that Democrats are pushing through the House, knowing full well that most of it’s probably going nowhere in the Senate.”

Pelosi’s comments came as Barr opted not to take part in a scheduled House Judiciary Committee hearing on Thursday. Barr objected after Democrats decided that their committee staff, rather than only members of Congress, would question him on his handling of the Mueller report. Justice Department officials said members should conduct the questioning and said it was unclear why Democrats did not propose having staffers simply provide questions to the members during the hearing.

“Do the Democrats really want to go to the voters, in what, less than a year and a half's time now, and have nothing to show for the last year and a half but fighting about -- over William Barr and subpoenas and testimony and the Mueller report and all that and the prospect of impeachment?” Hume asked.

“Or do they want to be able to go and say: ‘Look at the agenda we've laid out for you, America. We’ve passed as much of it as we can and the nasty, old Republicans in the Senate are blocking it,’ which is likely to be a more appealing message than impeach, indict, subpoena, and fight,” Hume continued.

Also on Thursday, House Judiciary Committee Chairman Jerrold Nadler, D-N.Y., slammed Barr and said he has “failed” to do his job.

Nadler lashed out at both Barr and President Trump, who has vowed to fight all subpoenas amid an escalating confrontation with Congress over an array of investigations. Barr himself has not been subpoenaed, and it’s unclear whether Democrats might take that step, but his DOJ has refused to comply with a subpoena for the full Mueller report.

Nadler also said Thursday that the committee will “have no choice but to move quickly to hold the attorney general in contempt if he stalls or fails to negotiate in good faith” on the release of the report and other documents congressional Democrats have requested and subpoenaed.

When asked how he expects Pelosi and other Democrats to proceed Hume answered, “She’s going to leave it up to the committees, it sounds like.”

“Nadler is hell-bent and he will probably either make a move to hold the attorney general in contempt but we've seen that show before. [Former U.S. Attorney General] Eric Holder was held in contempt and it affected him, other than maybe a note in his Wikipedia entry, almost not at all,” Hume said.

He added, “We're at daggers drawn here and it makes good copy, it absorbs all the news space, and it doesn't look like Pelosi wants to put a stop to it -- so here we are.”