Brit Hume currently serves as a senior political analyst for FOX News Channel (FNC). He acts as a regular panelist on FOX's weekly public affairs program, FOX News Sunday, and contributes to all major political coverage. He joined the network in 1996.Read More

Hume has provided political analysis of every major political event since joining the network. Most recently, he provided coverage during the 2020 presidential and vice presidential debates and the Democratic and Republican National Conventions.

Previously, from September 2016 until the 2016 presidential election, Hume stepped in as interim host of On the Record, which aired weekdays at 7PM/ET. He also previously anchored Special Report and led the program for more than 10 years, stepping down in December 2008. Under his leadership, Special Report was the highest rated political program on cable television. In this capacity, Hume also served as the Washington managing editor and was responsible for overseeing news content for FOX News' Washington bureau. He also anchored all of the network’s coverage for every presidential election from 1996-2008.

Before joining FOX News in 1996, Hume was with ABC News for 23 years, serving as chief White House correspondent from 1989 through 1996. During his tenure, he contributed to World News Tonight with Peter Jennings, Nightline and This Week, as well as various specials for the news division. Hume joined ABC in 1973 as a consultant for the network's documentary division and was named a Washington correspondent in 1976. He was later promoted to Capitol Hill correspondent and reported on Congress until 1988.

Earlier, Hume reported for United Press International, beginning his career as a newspaper reporter with The Hartford Times and The Baltimore Evening Sun.

He has received numerous honors and awards, including the 2003 Sol Taishoff Award for Excellence in Broadcast Journalism from the National Press Foundation and a 1991 Emmy Award for his coverage of the Gulf War. The author of two books "Inside Story" and "Death and the Mines," Hume was named "the best in the business" by the American Journalism Review for his extensive news coverage of the White House.

A graduate of the University of Virginia, Hume resides in Washington, D.C., with his wife Kim Schiller Hume. 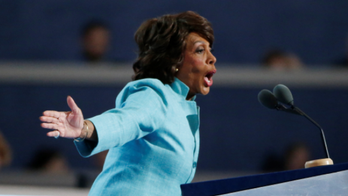 When Democratic Rep. Maxine Waters next rises to speak on the House floor, she will be recognized as “The gentle lady from California.” Never mind that she may not be many people’s idea of gentle or a lady.

The Grapevine: French President Jacques Chirac's outburst at the smaller European countries that have sided with the United States on Iraq came after a dinner at which he reportedly lost an argument with fellow European Union heads of state on Iraq.

The Grapevine: The organization that spearheaded those huge protests against war in Iraq in London over the weekend is threatening violence if the Blair government doesn't heed its wishes.

The Grapevine: Massachusetts Sen. John Kerry is sitting out this week's Democratic National Committee meeting -- doctor's orders. But that doesn't mean he won't be trying to compete with his fellow presidential hopefuls.

The Grapevine: Saudi Arabia and other Gulf allies may not be willing to use their forces in an attack on Iraq, but they are now going to do something that could be nearly as useful to the United States.

The Grapevine: The recent behavior of the German government under Chancellor Gerhard Schroeder may have alienated it from the United States, Britain and other countries, but it now appears that Shroeder has infuriated a key member of his Cabinet as well.

And now the most captivating two minutes in television, the latest from the wartime grapevine:FOX Fans: Missed the Grapevine?

The Grapevine: The NAACP tourism boycott of South Carolina has put Democratic presidential candidates in the awkward position of trying to run primary election campaigns in a state where the NAACP doesn't want them to spend any money on food and hotels

The GrapevineBishop Melvin G. Talbert, a chief officer in the president's church, appears in an ad saying a war in Iraq would "violate God's law"