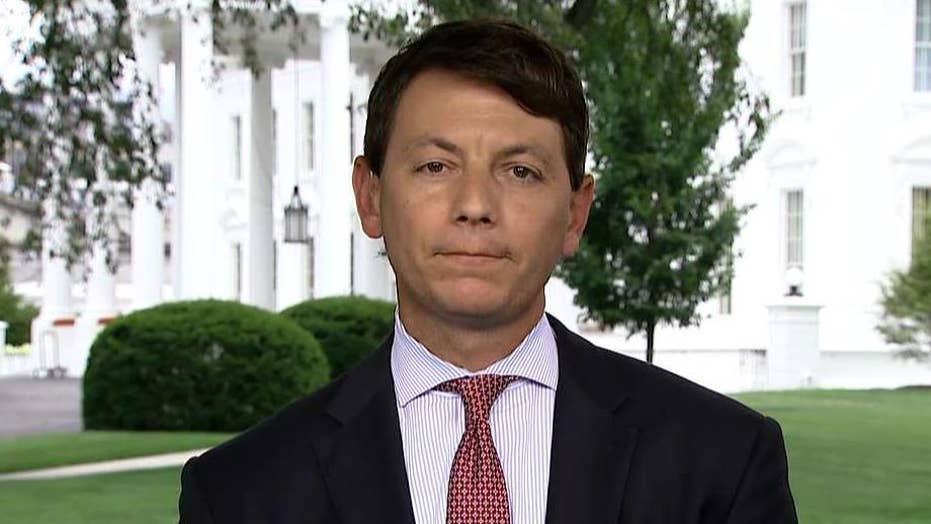 White House says Trump didn't let the 'send her back' chant go on very long, will try to stop it in the future

The problem with the progressive Democrat 'Squad' is that the four congresswomen continually run down America with problematic and dangerous language, says White House deputy press secretary Hogan Gidley.

Deputy White House Press Secretary Hogan Gidley said the "send her back" chant that erupted at President Trump's Wednesday North Carolina political rally was short-lived and claimed the commander-in-chief will do everything in his power to quash similar events in the future.

“He didn’t let the chant go on very long. You take a look at the clip, he was very stoic and he kept on driving his message home. He didn't let the crowd slow him down all that long. It's tough to hear what they were chanting in there," Gidley said on "Outnumbered Overtime" Thursday.

"I was actually in the room and it's pretty raucous at a President Trump rally because he's been so successful. People are excited about the future of this country with him as the president. And so he moved on, but he also said if someone tries that chant again... he's going to do his best to stop it."

Gidley said the issue goes beyond any potential racism or overreacting, and boils down to two radically different choices for the direction of America's political policy. He also said the four progressive Congresswomen known as "the squad" -- Alexandria Ocasio-Cortez, D-N.Y., Rashida Tlaib D-Mich., Ayanna Pressley, D-Mass., and Ilhan Omar, D-Minn. -- should express a more positive view on the U.S.

TRUMP SLAMS 'THE SQUAD': OUTRAGE OVER 'SEND HER BACK' CHANTS

"That's what this is really about here. It's two fundamental decisions, two fundamental opinions about where this country is," he said. "And there is a group on the left, led by 'the squad' if you will, that are so ungrateful and so disrespectful to a country that has given them opportunities that they would never have received anywhere else on the planet."

Gidley also mentioned comments from Housing and Urban Development Secretary Dr. Ben Carson, who rose up from poverty to become a world-famous neurosurgeon at Johns Hopkins and said "the squad" should take a page from his playbook, and reject victimhood in favor of victory.

"I was talking to Ben Carson yesterday, and I don't want to betray a trust with the secretary, but we were talking about his situation and you look at someone like Ilhan Omar, who was a refugee, now a Congresswoman. Look at someone like AOC who got assistance to go to college and then once she graduated was a bartender and now is a Congresswoman. This is an incredible country," he said.

"That couldn't happen anywhere else. and Ben Carson said to me, 'I've faced real racism in my life, coming from abject poverty but listen, I didn't let it slow me down. I became a neurosurgeon, I'm a cabinet member for a president of the United States.' He is not a victim, he is the victor. And that's the difference here."

Gidley reiterated his point about the two intensely divided paths being offered to Americans and said one side believes in holding up the U.S. as a shining example of freedom and success, while the other side resents the United States and blames it for the evils of the world.

"A fundamental dichotomy, a different choice between where we stand and where the left stands -- we believe this country is the greatest place, the greatest idea ever realized and they don't," he said. "They've said it time and time again and that's what this is about and the president's made that very clear."

He also called the language of "the squad" harmful and "dangerous," before listing some of the radical tendencies and associations of several progressive House members.

MODERATE DEM SLAMS 'SQUAD' FOR THREATENING TO PRIMARY HIM: 'THEY'RE NOT DEMOCRATS ... THEY'RE SOCIALISTS'

"The problem is these four women continually run down this country as being evil, the cause of so many problems across the globe and that's problematic and dangerous rhetoric and language," Gidley said.

"You hear someone like Ilhan Omar talk about the 9/11 attacks ... she laughs off Al Queda. When AOC continually derides and mocks this country and the people -- calls us garbage. Rashida Tlaib hangs out with known terrorists who've been convicted of killing people ... we are for the American people, even those who disagree with us. You've seen the president do everything in his power to make this country a better place, and has -- for every single demographic."