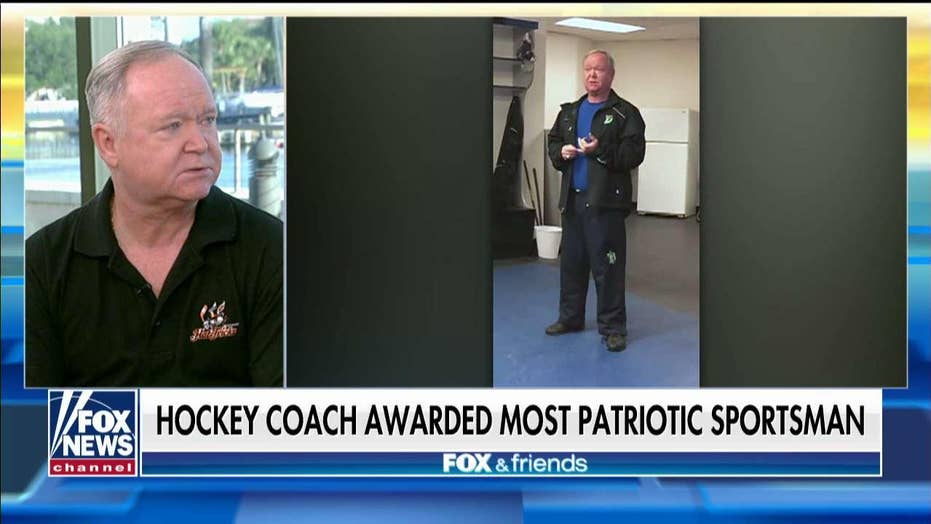 A Connecticut hockey coach who went viral for his demand of respect for the national anthem was awarded "Most Patriotic Sportsman" award at Fox Nation's inaugural Patriot Awards.

John Krupinsky, who is the assistant coach for the Danbury Hat Tricks and a sergeant with the Danbury Police Department, said on "Fox & Friends" Thursday that the experience was "very humbling" for him.

Krupinsky was the star of a July viral video after telling his team that anyone contemplating a protest during the playing of the "Star-Spangled Banner" should quit immediately.

"We're not women's soccer. We're not the NFL," he said in the viral video. "If there's anybody here that's going to be disrespectful to either the American or the Canadian national anthem, grab your gear and get the f--- out now because you'll never see the ice in this arena."

"We don't have that problem in hockey," he continued. "We're better than that. But there's no sense in wasting anybody's time if that s--- was going to happen."

The video was viewed more than 40 million times.

"I've received tons of calls from [hockey] coaches all over the country...and, you know, they've asked: 'Hey, our team's getting ready. We're going to a game Friday.' And, every time these guys call, I'll send them a quick video and talk to the team and stuff," he said.

"That's what hockey guys do. Everybody takes care of one another," said Krupinsky.

Sign up for a Fox Nation free trial today to see the first-ever Patriot Awards ceremony.