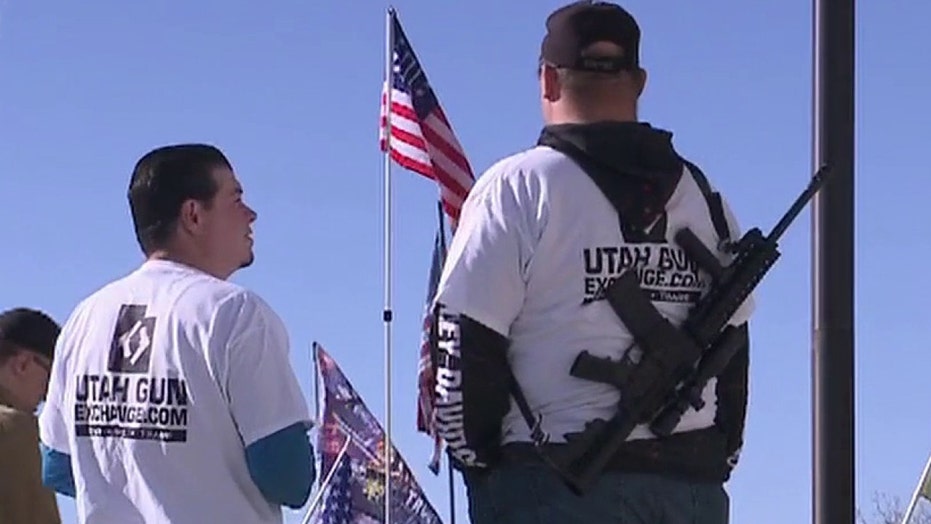 Opponents to a series of proposed gun control laws in Utah say lawmakers are proposing a solution to problems that don't exist.

"In Utah, we have one of the highest rates of firearm ownership, very, very little restrictions on firearms, we’re a very permissive state," Utah Shooting Sports Council Chairman Clark Aposhian told “Fox & Friends First” Monday. "Yet we have one of the lowest homicide and violent crime rates, even with a firearm, in the country, so what we’re asking for is to fix a problem that isn’t there.”

Over the weekend, Aposhian took part in a rally at the state capitol in Salt Lake City with hundreds of other Utah gun rights advocates.

The proposed legislation includes House Bill 109, which calls for universal background checks for firearm purchases; H.B. 115, where custodians can be found liable for damage caused by someone else using their firearm; H.B. 136, which would make it a criminal offense if a firearm is stored in a place that the gun owner knows that a minor or person legally restricted from possessing a gun has access to it and a person is injured by the minor or restricted person who used it; and H.B. 229, also known as a red flag law, which allows a family member or law enforcement to ask a court to restrain a person who may present a danger to others or themselves from possessing any firearms or ammunition for a specified length of time.

He added, “Felons can’t have firearms, people that make threats with firearms can’t own firearms and you can have them arrested [in Utah], so they’re talking about people that haven’t committed a crime and, you know, haven’t threatened anyone … yet they’re so apparently dangerous that they have to remove their rights to own a firearm without ever seeing a judge.”

Last month, Democrats in the Virginia House advanced a package of gun-control measures less than a week after tens of thousands of pro-gun advocates from around the country rallied at the state Capitol.