Gun rights advocates appear to be up in arms over the Trump administration’s impending ban on bump stocks, which is scheduled to take effect next year.

The move comes nearly 15 months after a gunman using bump stocks opened fire from his Las Vegas hotel suite into a crowd at a country music concert below, killing 58 people and injuring hundreds more. The devices allow assault-style weapons to fire like machine guns.

After the Las Vegas tragedy, bump stocks were under intense scrutiny. But Clark Aposhian, chairman of the Utah Shooting Sports Council, says banning bump stocks will do little to quell mass shootings.

“They were just looking for a scapegoat. And they found one,” Aposhian told the Salt Lake Tribune.

“They were just looking for a scapegoat. And they found one.” 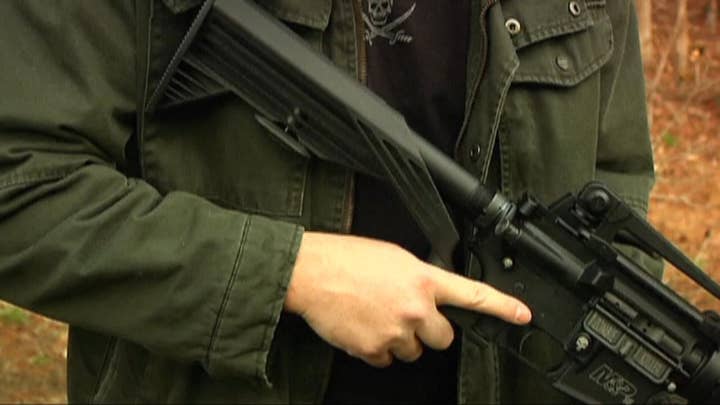 Other gun rights advocates worry the new measure will set a dangerous precedent.

Janalee Tobias, who founded Women Against Gun Control, insists more emphasis should be placed on the causes of mass shootings rather than the weapons themselves.

“Guns are harder to get than they ever have been but evil people still get guns,” Tobias said.

“Guns are harder to get than they ever have been but evil people still get guns.”

The regulation gives gun owners until late March to turn in or destroy the devices. After that, it will be illegal to possess them under the same federal laws that prohibit machine guns. But according to estimates cited by the Tribune, tens of thousands of bump stocks are in circulation.

How the administration will enforce the ban is not immediately clear.

Aposhian told the Tribune he will reluctantly comply with the new regulation but isn’t confident others will.

“Why should anyone have to give up their own private property?” he asked.

President Trump signaled his intention earlier this year when he tweeted: “We will BAN all devices that turn legal weapons into illegal machine guns.”

The Trump administration's action has effectively reversed a 2012 decision by the federal Bureau of Alcohol, Tobacco, Firearms and Explosives that weapons with bump stocks were not the same as machine guns. Multiple states opted to restrict the devices after the Las Vegas massacre, but Utah chose not to.

Aposhian dismissed the idea that bump stocks turn semi-automatics into machine guns, and criticized the new regulations for not taking mental health into account. He said the “one guy in Vegas” was not indicative of an overall “pattern of abuse or unlawful activity linked to bump stocks.”

“I think the president and the administration [have] let emotion rule the day on this one,” he told the Tribune.

Bryan Melchior, who runs an online gun exchange, derided the bump stock ban as “a feel-good move that doesn’t do anything to help” prevent massacres.

“No amount of infringement upon the civil rights of America will stop homicidal maniacs from carrying out their wishes,” Melchior said. “I spent the whole stinking summer and millions of dollars spreading that message."

"No amount of infringement upon the civil rights of America will stop homicidal maniacs from carrying out their wishes."

Gun rights groups elsewhere reacted much the same, with some threatening legal retaliation. The Virginia-based Gun Owners of America said it plans to file a lawsuit against the Justice Department and ATF to protect gun owners from "unconstitutional regulations."

"These regulations implicate Second Amendment rights, and courts should be highly suspect when an agency changes its 'interpretation' of a statute in order to impair the exercise of enumerated constitutional rights," the organization's executive director, Erich Pratt, said.

The National Rifle Association called the ruling disappointing and urged the Justice Department to provide amnesty for gun owners who already have bump stocks.

"We are disappointed that this final rule fails to address the thousands of law-abiding Americans who relied on prior ATF determinations when lawfully acquiring these devices," NRA spokeswoman Jennifer Baker said.

Bradford Betz is a breaking news reporter for Fox News Digital and Fox Business. Story tips can be sent to bradford.betz@fox.com  and on Twitter: @Bradford_Betz.