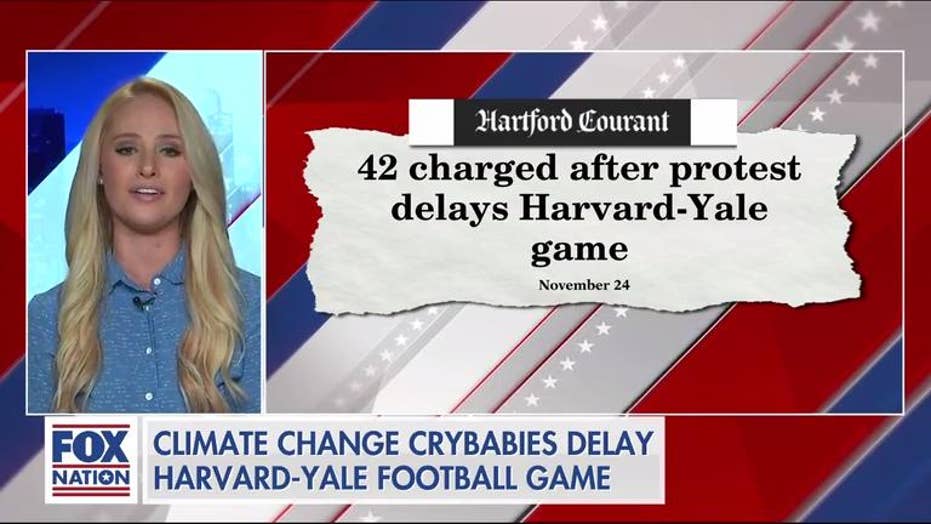 Fox Nation host Tomi Lahren had strong words for the climate protesters who swarmed a football field during halftime of Saturday's Harvard-Yale game, delaying the start of the second half by nearly an hour.

As the Ivy League teams squared off against each other for the 136th time on Saturday, protesters rushed the field to stage a climate protest during halftime.

Some held signs demanding that Ivy League schools divest from the fossil fuel industry. Others carried signs that raised issues, such as Puerto Rican debt and the treatment of the Uighurs in China.

Initially, police in yellow vests lined up alongside the sit-in but did not intervene. When the 15-minute halftime expired and the protest continued, hundreds more protestors streamed onto the field to join in.

The incident lasted over an hour before police escorted some of the protesters off the field. An estimated 42 others were reportedly arrested and charged with disorderly conduct for interrupting the game.

"Apparently, organizers considered their tantrum a success," she said.

"Well, maybe I’m not 'climate woke' enough to get it but could someone please tell me how rushing a football field at halftime and then refusing to leave the field thereby disrupting and delaying the game for civilized players, fans and game attendees did anything to help Mother Earth?"

"And by the way," she continued, "the only 'awareness' you raised was displaying your epic immaturity for everyone to see."

Later in the Fox Nation segment, Lahren highlighted the different motives between the climate protestors and those in Hong Kong, who are currently "risking their lives for freedom, democracy and human rights."

"That’s a protest," Lahren said, "that’s standing up for something bigger than themselves. That’s brave and bold and admirable."

"A bunch of whiny, entitled Ivy League college students disrupting a college football game, is not," she added.

Doubling down on her criticism of climate change protestors, Lahren said they "solve zero problems," and fired back against accusations that she doesn't care about the issue.

"They parade around and act like fools in the name of climate change for attention and to feel like they’ve done something when in reality, they’ve done nothing and solved zero problems. All they’ve done is create problems, for crying out loud."

"And for the record," she continued, "when people like me criticize these climate change tantrums, it’s not because we hate the Earth and want to see it destroyed. It’s because we are sick and tired of crybabies whose only solutions include screaming, shouting, and making a scene."

Instead, Lahren suggested protestors "do something productive," but considered it unlikely if they receive an overwhelming amount of media attention for their disruptive protests, she explained.

"Go clean up a beach, adopt a highway or innovate clean technologies via the free market and capitalism. That, I can respect. That, I can even get behind..."

"Go clean up a beach, adopt a highway or innovate clean technologies via the free market and capitalism. That, I can respect. That, I can even get behind...but those activities don’t get the attention these narcissistic tree-huggers truly yearn for," she said.

"What a mockery of activism," Lahren concluded. "Even for 2019 standards."