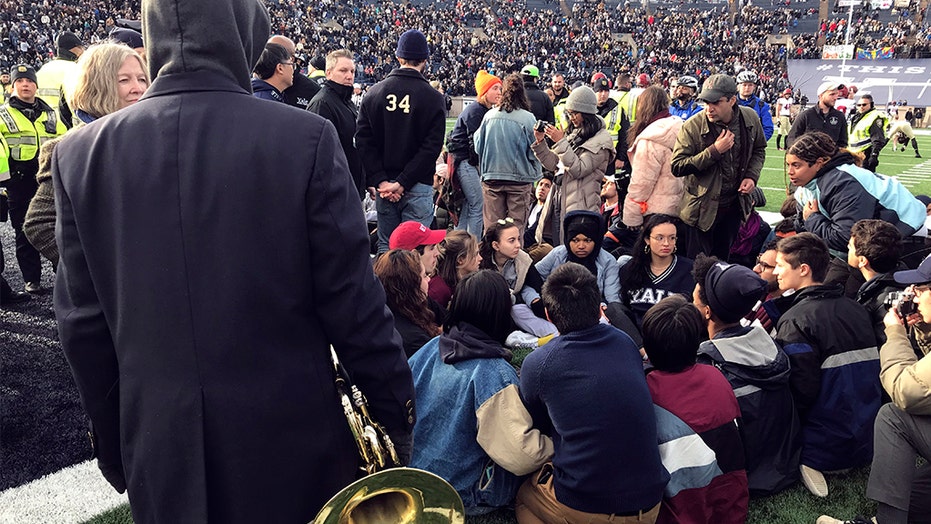 Saturday's Harvard-Yale football game came to a halt after climate protesters staged a sit-in during halftime and refused to leave.

A few dozen protesters made their way onto the field. Some held signs demanding that Ivy League schools divest from the fossil fuel industry. Others had signs that raised issues of Puerto Rican debt and the treatment of the Uighurs in China.

The incident ended after about an hour when police escorted some of the protesters off the field. A handful of others were arrested.

Police in yellow vests initially lined up alongside the sit-in but did not intervene. When the 15-minute halftime expired and the protest continued, hundreds more fans streamed onto the field to join in. By halftime, Harvard was leading Yale 15-3.

Chants of “Hey Hey! Ho Ho! Fossil fuels have got to go!” were interrupted by the public address announcer imploring the protesters to leave.

“As a courtesy to both teams, the game must resume,” he said.

After about an hour, police formed a line and moved forward, from the Yale sideline toward the Harvard sideline. An agreement was reached to escort the remaining protesters off the field, with one police officer to accompany every two protesters.

Those who did not leave at that point, about one or two dozen, were informed by Yale Police Chief Ronnell Higgins that they would be arrested.

The protest received support from Rep. Alexandria Ocasio-Cortez, D-N.Y., who has become a leading figure of the progressive movement's climate advocacy.

Others weren't supportive of the protest.

"If we haven’t yet reached peak stupid, then we are assuredly about to cross the event horizon," former Secret Service agent Dan Bongino tweeted.

The incident was just the latest in a series of climate demonstrations that erupted in the fall. Protesters held sit-ins in the offices of both House Speaker Nancy Pelosi, D-Calif., and Indiana Mayor Pete Buttigieg, demanding more aggressive action on climate change. Actress Jane Fonda has participated in several protests, including one on Friday that resulted in multiple arrests.

Climate change has gained more attention as 2020 Democrats shone a spotlight on the issue and President Trump filed paperwork to officially withdraw the United States from the Paris Climate Agreement.