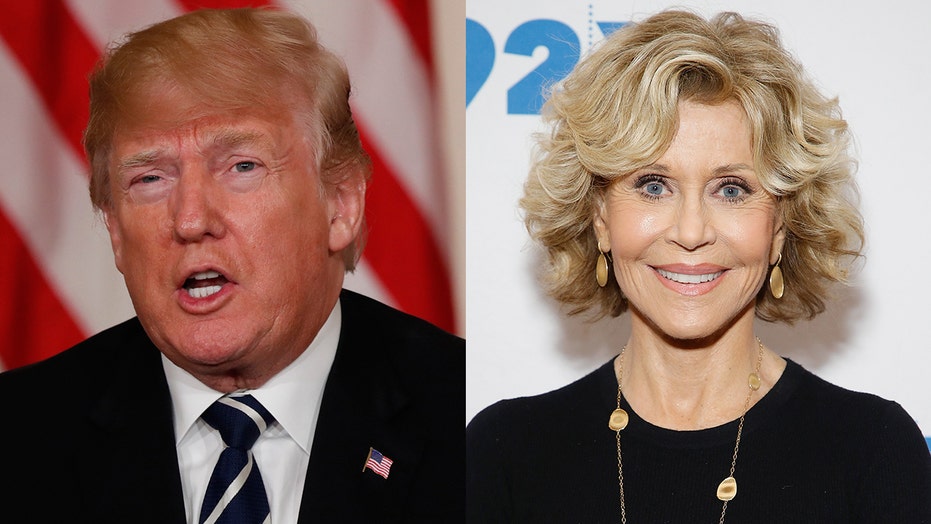 President Trump reacted to Jane Fonda's latest string of arrests while he spoke at a rally Wednesday in Louisiana.

The president mocked the 81-year-old actress, who has been protesting on the Capitol Building steps in Washington, D.C., for several weeks in an effort to shine a light on climate change. During his rally, Trump began discussing climate change advocates when he went off on the “Grace and Frankie” star.

“They arrested Jane Fonda, nothing changes. I remember 30, 40 years ago they arrested her,” he told the crowd. “She’s always got the handcuffs on, oh man. She’s waving to everybody with the handcuffs. I can’t believe it.”

JANE FONDA JABS BIDEN, SAYS WE ONLY HAVE '11 YEARS TO AVOID CATASTROPHE' ON CLIMATE CHANGE

Trump went on to bring up Fonda’s 1972 visit to North Vietnam, which earned her the nickname “Hanoi Jane.”

“Remember that? She went to Vietnam to find out how nice they were. They weren’t too nice to her, by the way,” he said. “No, they arrested her today. Jane Fonda, nothing changes. They arrest… every 25 years they arrest her.”

Fonda was most recently arrested on Friday.

Despite the president’s comments, Fonda seems undeterred in her mission to get arrested every week on her “Fire Drill Fridays” to encourage people to take action on climate change.

Actress and activist Jane Fonda is arrested at the Capitol for blocking the street after she and other demonstrators called on Congress for action to address climate change, in Washington.  (AP Photo/J. Scott Applewhite, File)

“Those people are always going to attack that way,” Fonda told Washington’s FOX 5 after her fourth arrest since beginning her crusade. “The best way to attack a celebrity is to say, ‘Here she is, doing it for their own glory or promotion or whatever.’”

The actress appeared Tuesday on “The View,” where she explained her decision to break the law as an act of protest.

“You know something? Climate activists have been doing this for 40 years. We've been writing articles and we've been giving speeches, we've been putting the facts out to the American public and politicians and we've marched and we've rallied peacefully -- and the fossil fuel industry is doing more and more and more to harm us and our environment and our young people's futures,” she explained. “And so we have to up the ante and engage in civil disobedience -- which means getting arrested.”