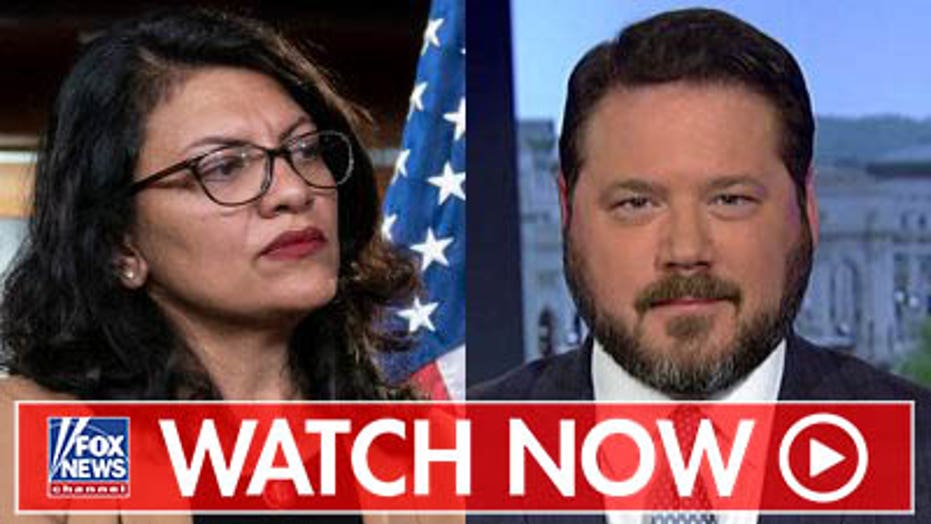 The media must call out Democrats for remarks made by two of their own if they intend to denounce rhetoric from President Trump they find troubling, according to Ben Domenech.

Reps. Ilhan Omar, D-Minn., and Rashida Tlaib, D-Mich., expressed "abhorrent" views about Israel which should be addressed before any Democrat is given time to claim Trump is making racial remarks, the Federalist publisher claimed Monday on "Special Report."

"What we saw today was a disgusting display," he said.

"These were two members of Congress, of the People's House, expressing in public views that are not just abhorrent but anti-Semitic."

"This is a situation where, for every Democrat who comes on this network and others, and denounced the president in the past couple of years for what they view as racist expressions on his part, [they] should be called out as hypocrites if they don't denounce the kind of things that have been expressed by these two members of Congress," he continued.

The two lawmakers held an afternoon news conference at the Minnesota State Capitol Building with Palestinian-American and Jewish-American residents who said they also have been affected adversely by travel restrictions to Israel and the Palestinian territories.

The purpose of the event, Omar said, was to “highlight the human costs of the occupation and travel restrictions on Palestinians and others.”

“We in the United States have a constructive role to play,” Omar said at the news conference in St. Paul. “We give Israel more than $3 billion in aid every year. This is predicated on them being an important ally in the region and the only democracy in the Middle East. But, denying a visit to duly elected members of Congress is not consistent with being an ally.”

On "The All-Star Panel," Domenech added Omar and Tlaib are "lying" to the public in regard to their itinerary on their now-canceled trip to Israel.

"They could've easily participated in the bipartisan congressional delegation... that went over there recently," he said.

"They planned to go over there and do everything they could to make the case that the Jewish state as it exists in Israel is an abhorrent thing that ought to be viewed in a negative way by the American people."

Since 2015, Democratic lawmakers have taken issue with Trump's rhetoric about illegal immigrants and other groups, including after fiery remarks he made about Mexico in his presidential campaign kickoff speech at Trump Tower in New York.