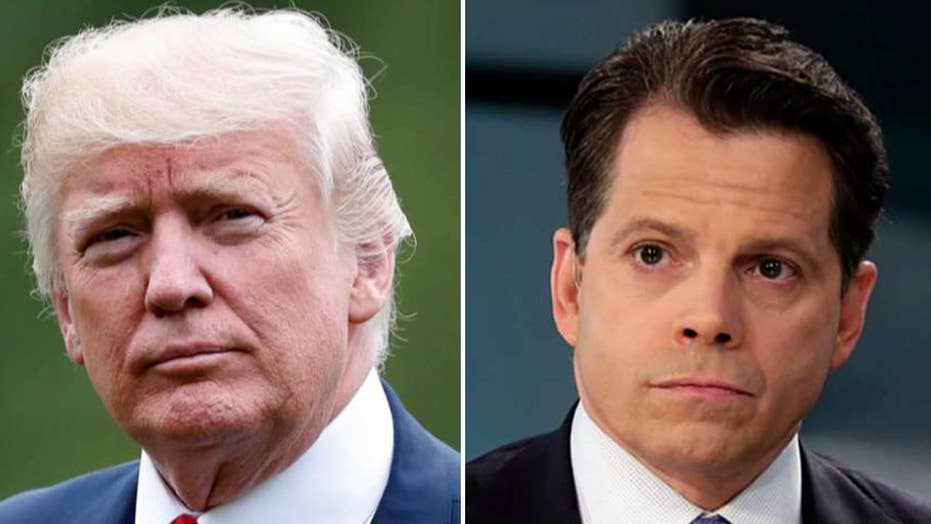 "Oh my God, this jack---," Scaramucci told Vanity Fair when asked about the past few days in his clash with the president. "You know, it’s all good. I mean, it could be the best three or four days ever, actually."

The interview, published on Friday, offered insight into the way Scaramucci sees Trump, himself and their battle.

Trump, on Saturday, derided Scaramucci, who held his position in the administration for just a short time,  as desperate to rejoin his team at the White House.

"Anthony, who would do anything to come back in, should remember the only reason he is on TV, and it’s not for being the Mooch!" he said.

Jabbing at Trump's physical well-being, he said: "OK, you see just by the way he’s sweating, his body’s not doing well. It’s obviously not a guy that takes care of himself, right? And he doesn’t listen to anybody."

TRUMP CAMPAIGN AIDE: 'LOSER' ANTHONY SCARAMUCCI 'IS ALL ABOUT' HIMSELF AND HE 'TERRORIZED' STAFF

"You can ask young staffers in the communications office that literally were terrorized by Anthony Scaramucci, where he only survived 11 days in that job."

In Friday's interview, Scaramucci suggested he's uniquely suited to combat Trump. "He has nobody that he’s going up against that can fight like him," he said after "Vanity Fair" asked him what his "role" was.

"And by the way, watch what I’m doing. I’m not calling him Small Hands or saying he’s got a small penis. I’m not doing any of that. I’m attacking him by asserting presidential leadership; this is where the bar is, this is where you are. You’re bullying. You’re angry. You’re detached. You can’t put a coalition together. You can’t delegate and form a managerial structure to run the country."

The Mooch also predicted that Trump would drop out of the 2020 race in order to avoid being humiliated by a likely defeat.

"It’s gonna become very clear that it’s impossible for him to win. And is this the kind of guy that’s gonna want to be that humiliated and lose as a sitting president? He’s got the self-worth in terms of his self-esteem of a small pigeon," Scaramucci claimed.

"It’s a very small pigeon. OK. And so you think this guy’s gonna look at those poll numbers and say — he’s not gonna be able to handle that humiliation."