President Trump showed off his signature red cap emblazoned with a new campaign slogan during a rally Thursday in New Hampshire.

The president began by asking the packed Southern New Hampshire University Arena in Manchester whether they wanted him to keep his 2016 tagline, "Make America Great Again," or introduce a new, updated slogan.

"Do we give up the greatest theme -- phrase -- logo... in the history of politics?" he asked. "Because 'Make America Great Again,' we're really sort of there, and we have a little time left." 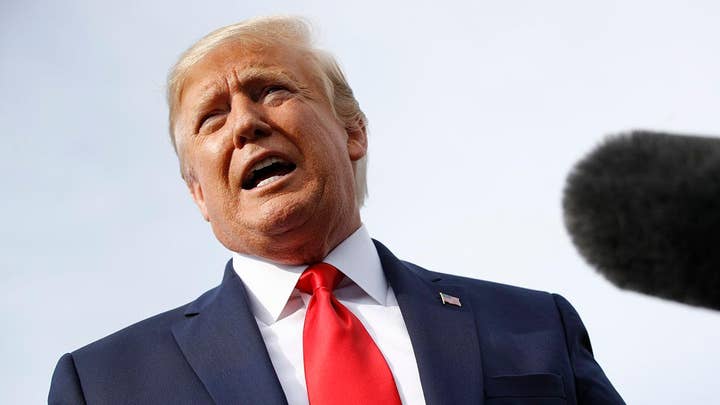 "Who's in favor of our theme being 'Keep America Great'?" he asked. The crowd responded by cheering and raising campaign signs with the new slogan on them.

Amid the applause, the president pulled out a red cap with the new slogan printed on it.

As he appeared to prepare to don the cap, he turned to a person in the audience and realized he had previously borrowed it from them.

"Now wait a minute, this is your hat," he said, smiling and tossing it in the supporter's direction.

Trump later claimed "Keep America Great" is an apropos slogan, given the competition on the Democratic side in 2020.

"We have these socialists who want to take it away from us," he said, in an apparent reference to at least one Democratic contender, Sen. Bernie Sanders, I-Vt.

The stage was set for Thursday's fiery rally when the president told reporters at a New Jersey airport that Reps. Ilhan Omar, D-Minn., and Rashida Tlaib, D-Mich., were "very anti-Jewish and anti-Israel" -- and said he supported Israel's decision to bar them from entering the country.

"Now we have a bunch of socialists or communists to beat," Trump said, as the Manchester crowd jeered. "They're not far away. Does anybody want to pay a 95 percent tax?"

After a protester briefly interrupted the rally, Trump remarked, "That guy has a serious weight problem. Get him out of here, start exercising."