Sen. Scott: This is a do-nothing president

Florida Sen. Rick Scott says the administration doesn't want to acknowledge how its policies are impacting the economy.

Florida Sen. Rick Scott countered the Biden administration's claim that America is not in a recession by noting that the state of the economy now meets the basic requirement. On "The Faulkner Focus" Tuesday, Scott called out President Biden for doing nothing to help Americans who are struggling with inflation, high taxes and the supply chain.

SEN. RICK SCOTT: If you go to Google and you put in "recession," and you look at the definition, I think it's two quarters of negative GDP. So I think it's pretty basic. But they don't want to acknowledge what's happening. By the way, when we have negative GDP, what's that mean? That means you make less money. That means people are going to get laid off. That means the value of things are going to go down, like your home. That's what's happening. And by the way, it's happening. And it's happening because the Biden agenda. They're not reducing taxes, they're increasing taxes. They're not reducing regulation, they're increasing regulation. We have the highest inflation in 40 years. I was in a roundtable with Florida businesspeople this weekend. They're all struggling. They're struggling with supply chains. Biden's done nothing on that. They're struggling with inflation. Biden's done nothing on that. They can't get workers. Biden's done nothing on that. This is a do-nothing president. 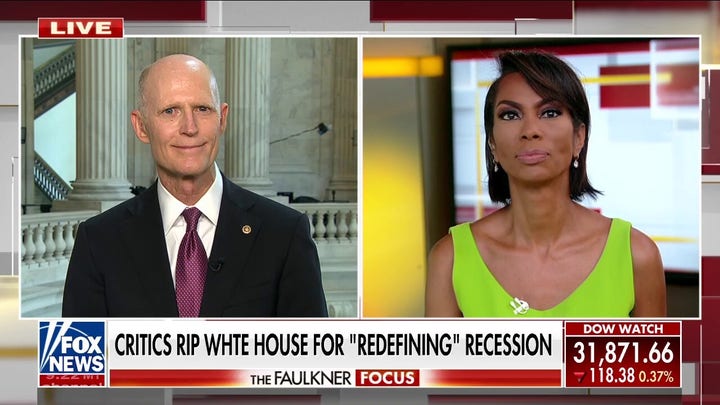